At the Milbank Tweed Forum on October 12, Professor Catherine Sharkey moderated a discussion titled “A Brewing Debate: Does the Tort System Need Reform?” To set the stage for the discussion (and the pun in its title), the documentary Hot Coffee was screened the evening before. The film offers a plaintiffs’-side take on a widely publicized personal-injury case involving a woman who sued MacDonald’s after spilling a cup of the chain’s scorching coffee in her lap and more generally on a decades-long effort by corporations to enact “tort reform.” 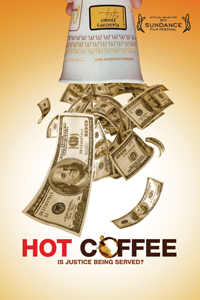 The Forum panelists represented both sides of the tort reform debate. Presenting the business-community view, which supports curtailment of lawsuits and limits on damages, were J. Russell Jackson, a partner in the mass torts and insurance litigation group of Skadden, Arps, Slate, Meagher & Flom, and Victor Schwartz, chair of the public policy group of Shook Hardy & Bacon and general counsel of the American Tort Reform Association. Elizabeth Cabraser, a partner with the class-action firm Lieff Cabraser Heimann & Bernstin, and Andre Mura, litigation counsel for the Center for Constitutional Litigation, offered the pro plaintiff position, favoring broad access to courts and few if any constraints on remedies.

The panelists demonstrated the sharp divide between the plaintiffs’ and defense bars on torts. One exchange that captured this dealt with caps on noneconomic damages, such as pain and suffering. It’s very costly for individuals to pursue lawsuits, Cabraser said, and if there is no prospect of a significant damage award, neither claimants nor lawyers will want to go to court. The purpose of caps “is simply to make litigation uneconomic to pursue,” she said. “That’s not the purpose as I understand caps on noneconomic damages at all,” said Jackson. Their aim, he said is “to come up with a number that is sufficient to compensate most people for pain and suffering, but that doesn’t put [a] huge element of risk in a trial for a defendant if they’re going to go to trial.”

The exchange, delving into the realities of products liability and mass torts practice, reflected the point Sharkey made at the opening of the discussion -- that at NYU Law, teaching focuses on “cutting-edge legal issues in tort out in the real world” and is not “just an arcane doctrine that’s interesting if you want to return to the nineteenth century.”