Sherrilyn Ifill '87 encourages a sense of obligation at NYU Commencement

The Law School was well represented at New York University’s 183rd Commencement on May 20. The occasion marked the final graduation ceremony for both Martin Lipton ’55, the outgoing chair of the University’s Board of Trustees, and NYU President John Sexton, a dean emeritus of NYU Law, as well as the conferring of an honorary doctorate of laws on Sherrilyn Ifill ’87, president and director-counsel of the NAACP Legal Defense and Educational Fund, who addressed the enthusiastic crowd at Yankee Stadium.

Welcoming the graduating students and their guests, Lipton paid tribute to Sexton, with whom he has worked closely since Sexton’s appointment as NYU Law’s dean in 1988, shortly after Lipton became chair of the Law School’s Board of Trustees. “John is the outstanding university educator and leader of this generation,” said Lipton. “Our partnership has been a unique and symbiotic relationship. Together during these past 27 years, we have accomplished greatness for our Law School and for our University.” Sexton, in turn, praised Lipton. “Arguably the leading lawyer of his generation, his service to our University in the 60 years since his graduation has been unique, in the literal sense of that word,” said Sexton. “His love for NYU and his commitment to the pursuit of excellence have inspired all of us at the University. His mark is upon our progress. We could not be more grateful to him.”

Sexton also shared the role of introducing Ifill, praising his former student as a “mentor to future generations of civil rights activists and lawyers.... You reflect the core values of our university as the national conversation on race and the law takes on added urgency.” NYU Law Trustee Ellen Schall ’72, former dean of NYU’s Robert F. Wagner Graduate School of Public Service, read from the University's citation, calling Ifill “a leading voice in the national dialogue on equality and civil rights in the United States.”

Ifill, speaking to the entire University almost a year to the day after addressing NYU Law’s Class of 2014, demonstrated why she had received such praise. 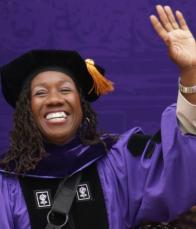 Invoking the many challenging incidents that have surfaced in the national conversation about race during the past year—such as the deaths of unarmed black men by police in Ferguson, Missouri; Staten Island; and Baltimore, as well as the ambush killing of two police officers in Brooklyn—Ifill recalled a phrase by Thomas Paine that she remembered from 10th grade in her Queens high school: “These are the times that try men’s souls.”

“These in fact are the times that try men’s and women’s souls,” said Ifill. “The past nine months have challenged the very soul of our nation, such that we cannot pretend, even as we are here filled with the excitement of this day, that there are not deep challenges awaiting us.”

Ifill mentioned many of these, adding that she knew her audience was well aware of them: crippling student debt; the difficulty of finding a job; anti-LGBT discrimination; being stopped on the street or in a car for one’s appearance alone; worrying about parents with little or no savings, and the cost of college for one’s children; and increasingly stringent voter ID laws.

Lingering a moment on the issue of a prison population that has reached “unsustainable and shameful proportions,” Ifill said, “You know that incarcerating two million people is a sign of American failure, not American success.”

There was nothing less, she said, than a “crisis of confidence in the rule of law and in our justice system,” and it required action. “I encourage your discomfort, that you must contribute, that you must make your voice heard. That is the essence of good citizenship, that bone-deep sense of obligation that you must work to improve our democracy, and to improve it especially for those who are most marginalized and most in need."

At the end of her speech, Ifill shifted from the societal to the intensely personal, revealing that she had been one of the passengers on the Amtrak train that had crashed in Philadelphia only eight days before.

Finding herself walking along the tracks in a daze away from the wreckage, Ifill turned to the “favorites” listed in her cell phone: her sister, husband, daughters, best friends. All of them rushed to her aid.

“I wish to not only call upon you to use this extraordinary education to exercise the highest form of citizenship, to fight for justice and peace and equality in our democracy, to be excellent,” she said, “but I also call upon you to just as passionately nurture, tend, and cherish your favorites, the ones who, when calamity happens, will find you and surround you with their love and lead you out of the fog.”