Cassandra “Sandy” Williams, already a well-known figure in the NYU School of Law community, has been named as the Law School’s new assistant dean for JD admissions. 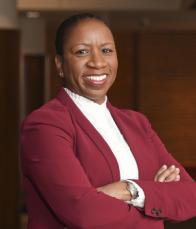 Williams previously spent five years as the department’s director, with a focus on expanding outreach to prospective NYU Law students and collaborating with constituencies across the Law School to make its admissions process more effective and responsive.

Williams has built a career as a leader in the field of law school admissions, having worked previously in Harvard Law School’s admissions office and serving on the Board of Directors of the Law Admission Council, including as chair of the board’s Services and Programs Committee. She earned her BA at the University of Pennsylvania and her JD at Tulane University Law School.

At NYU Law, Williams has served under Associate Dean of Admissions Kenneth Kleinrock, who is retiring after 27 years at the Law School. Williams will start in her new position on November 1.