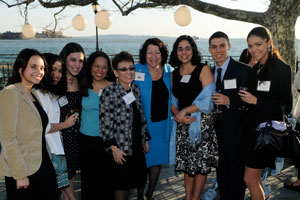 On May 26, President Barack Obama nominated Judge Sonia Sotomayor of the U.S. Court of Appeals for the Second Circuit to be the next justice on the Supreme Court.

"Judge Sotomayor is one of our nation's most accomplished judges," said Richard Revesz, Dean and Lawrence King Professor of Law at NYU School of Law. "NYU Law School was privileged to have her as an adjunct professor from 1998 to 2007, when she taught trial and appellate advocacy and a federal appellate court seminar. As a result of her intellect and determination, she overcame great adversity and went on to graduate summa cum laude from Princeton University and to receive a J.D. from Yale Law School, where she was an editor of the Yale Law Journal. Judge Sotomayor's years of experience as a former prosecutor, law firm partner, and trial and appellate court judge make her uniquely qualified to serve on the Supreme Court."

Read comments in the Blog of Legal Times of Jenny Rivera '85, former clerk to Judge Sotomayor and currently a professor at CUNY School of Law