Larry Silverstein, president and CEO of Silverstein Properties, was the honored guest at the Student Luncheon Lecture Series of the Pollack Center for Law & Business.

Six weeks after signing a 99-year lease for the World Trade Center, Larry Silverstein found himself in the unenviable position of paying $120 million in annual rent for a vast pile of rubble. Silverstein faced a litany of seemingly insurmountable obstacles in trying to rebuild at the devastated site.

Shortly before 9/11, Silverstein and his wife, Klara, had been discussing how best to enjoy their golden years. After the terrorists struck, however, Silverstein absorbed “the magnitude of the realities,” and particularly of his lease, which lacked any provisions of abatement and obligated him to repair any damages to the buildings quickly.

But the ultimate decision about whether or not to rebuild on the site, Silverstein said, occurred during a conversation with Klara. “I said, ‘Tell me what you want to do, because whatever you want to do, I’ll do.’ So she looked at me and said, ‘You’re not going to be happy doing anything else, so let’s get on with it and let’s rebuild the Trade Center.’”

Silverstein’s next step was to contact two of the founding partners of Wachtell, Lipton, Rosen & Katz: Herb Wachtell ’54, Silverstein’s close friend for nearly six decades, as well as Martin Lipton ’55, with whom Silverstein had served for years on NYU’s Board of Trustees. “I got on the phone with Herb and I said, ‘Herb, I’ve got a problem.’ He said, ‘Ha! Do you have a problem!’” While Silverstein wanted to rebuild, his insurance coverage of the World Trade Center site, cobbled together with numerous policies from a total of 25 insurers to create the maximum possible protection, totaled only $3.5 billion—far from enough to restore the site.

It was here that the worlds of real estate development, insurance and law converged: “Sitting with Herb Wachtell and Marty Lipton,” said Silverstein, “they came up with this concept of two events. Why? Because you had two separate planes hitting two separate towers at different times, and therefore we were entitled to $7 billion, not $3.5 billion…. And so that was the beginning of an odyssey, or an iliad or whatever.”

The odyssey dragged on for the better part of six years as Silverstein’s litigation against his insurers moved through the courts: “We found ourselves dealing with government and needed various leaders in government, and then we found ourselves dealing with insurance companies that were determined that we were illicits or something, just had no right to receive this money for purposes of rebuilding and suggested that we don’t rebuild, which was perhaps beneficial to then, but something that I couldn’t possibly countenance.”

It finally took the intervention of both New York State Insurance Department Superintendent Eric Dinallo ’90 and Governor Eliot Spitzer himself to broker a final deal between Silverstein and his insurers in 2007. Meanwhile, Silverstein had also contended very publicly with the Port Authority of New York and New Jersey, which owned the land at Ground Zero, and the Lower Manhattan Development Corporation, whose development plans for the site clashed with Silverstein’s.

Silverstein’s justifiable pride in reaching a favorable outcome for the World Trade Center site was clear as he described the new buildings being erected there. In response to a question about the safety of the new buildings, he described the process of rebuilding 7 World Trade Center, the only finished building on the site as of Fall 2007: “What we decided to do was to take everything we learned on 9/11 about how not to build a high-rise office building and put those lessons into the design of 7. Seven is a building built totally, totally beyond code. It’s the best damn building built in America by a huge standard…. You’re going to watch the building code of the City of New York slowly but surely come up to meet the standards that we’ve embraced.”

With plans to complete the final building on the site, the Freedom Tower, in 2012, Silverstein is going full speed ahead: “At end of day we’ll have something that’s going to be so damn spectacular, I think it’s all going to be fully worth it.” 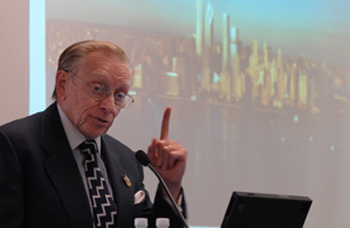