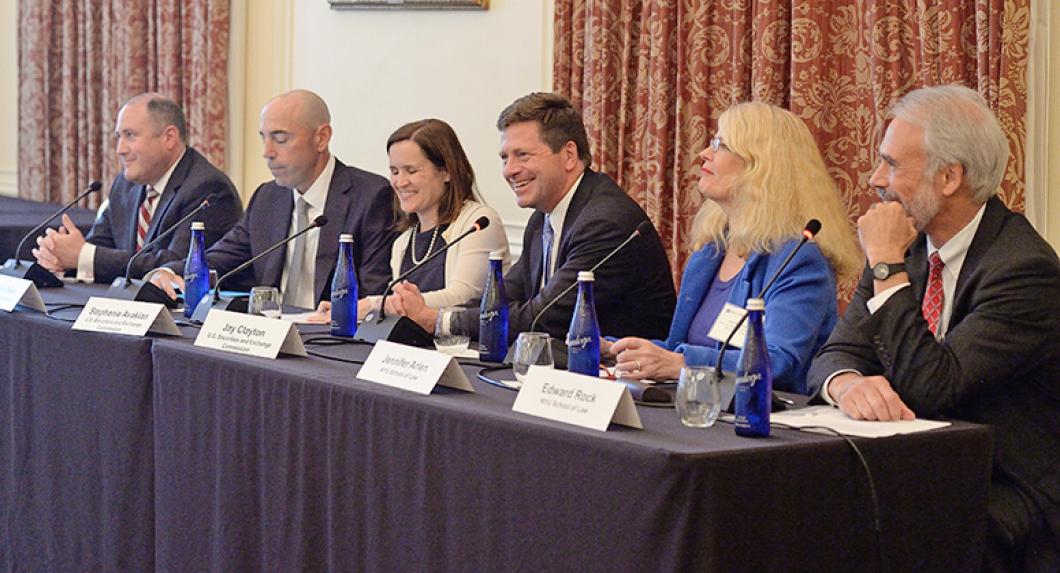 Securities and Exchange Commission chairman Jay Clayton announced two new priorities for the SEC at a September 5 event featuring senior agency officials. One new focus for the agency is cybersecurity practices and risk disclosure by public market participants; a second concerns market abuses in the emerging realm of initial coin offerings, a method some start-up companies are turning to raise capital in the form of digital assets known as cryptocurrencies.

“I’m not comfortable that the American investing public understands the substantial risks that we face systematically from cyber issues,” said Clayton, who assumed the top post at the regulatory agency in May. “I’d like to see better disclosure around that.”

The panel, hosted by the Institute for Corporate Governance and Finance, the Program on Corporate Compliance and Enforcement, and the Pollack Center for Law & Business, also featured the co-directors of the Division of Enforcement, Stephanie Avakian and Steven Peikin, and Peter Driscoll, acting director of the Office of Compliance Inspections and Examinations. Norma Z. Paige Professor of Law Jennifer Arlen '86 and Professor of Law Edward Rock (who taught Clayton in an antitrust law class at the University of Pennsylvania Law School) served as moderators.

Acknowledging that cybersecurity is a difficult issue for all firms, Driscoll pointed to a risk alert document his office published in August after examining the cybersecurity preparedness practices of 75 firms, including broker-dealers, investment advisers, and funds. The alert identified some common weaknesses, such as organizations failing to address vulnerabilities even after testing revealed them, or neglecting to cut off access to their networks for employees who had been terminated.

In the realm of cryptocurrencies, Peikin pointed to DAO tokens as an example. A virtual organization called “The DAO” (short for "decentralized autonomous organization") offered and sold 1.15 billion DAO tokens in a one-month period last year, raising the equivalent of $150 million in a digital asset called Ether. The SEC did not bring an enforcement action against the DAO, but it issued a report signaling that it considered DAO tokens to be securities, and therefore subject to federal securities laws.

The SEC will continue to focus on protecting retail investors and in individual accountability in its enforcement actions, according to the officials. “I wouldn’t expect to see any pendulum swing, but we are very focused on things that affect retail investors; these are often our most vulnerable investors,” said Avakian.

“The securities industry has rewarded many people who work in it. It is an important industry that links our industrial sector to the everyday investor, and people should behave,” said Clayton. “And if they don’t behave, it is important to focus on individual accountability.”