Dean Richard Revesz honored at unveiling of his official portrait

The unveiling of the portrait of Dean Richard Revesz, who will end his 11-year deanship on May 31, attracted a full house to Tishman Auditorium on April 9 as a host of distinguished speakers paid tribute to his accomplishments.

Serving as a master of ceremony, Vice Dean Jeannie Forrest invoked Revesz’s interest in demonstrable data-based results as she referred to the half-billion dollars raised during his tenure, the 46 new faculty he had hired, and the more than 11,000 students who had graduated in that time. Fellow master of ceremony Barry Friedman, Jacob D. Fuchsberg Professor of Law, said of his work with Revesz, “He’s taught me so much about dedication to an institution, about working hard to get the seemingly impossible done, and perhaps most importantly, about caring for people.” 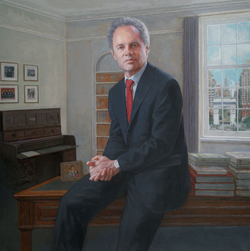 Those themes were echoed repeatedly by the other speakers at the event. NYU President John Sexton, Revesz’s predecessor as the Law School’s dean, remembered going to the Supreme Court to recruit Revesz, who was clerking at the time for Justice Thurgood Marshall. “There I met for the first time this remarkable being,” said Sexton. “He elevated our faculty the moment he joined it, but then he went about elevating it again and again.... I don’t think there’s anyone in the period of 14 years when I was the titular dean of the Law School that had more to do with shaping the heart and soul of the Law School—which is its faculty—than Ricky. So it really is the case that for 25 years Ricky’s been the dean in the most important way.”

Supreme Court Justice Elena Kagan, who became dean of Harvard Law School a year after Revesz succeeded Sexton, spoke warmly of her friendship with Revesz, whom she called “a legend,” despite the fact that they had competed vigorously for the best faculty and students. “Over the last 11 years, NYU Law has had the best dean in the business, bar none,” said Kagan. “When I looked around and tried to think about what other people and other institutions were doing, there was no one I looked to more than Ricky Revesz, and no school I looked to more than NYU to see what was going on here and how I could incorporate some of Ricky’s successes in my own institution.”

Kagan also demonstrated a keen sense of humor about their rivalry, acknowledging that it could be as frustrating as it was friendly. “Ricky made me feel that competition every day,” she said, adding that his serial successes in recruiting candidates that she could not were “highly annoying.”

Judge Robert Katzmann of the U.S. Court of Appeals for the Second Circuit, an adjunct professor at the Law School, spoke of Revesz’s excellence as a scholar, mentor, and friend. “He is an amazing entrepreneur of seemingly unlimited energy, a visionary with a capacity to bring people together in common cause for the greater good, whose attention to detail—which so often makes all the difference—is legendary.” 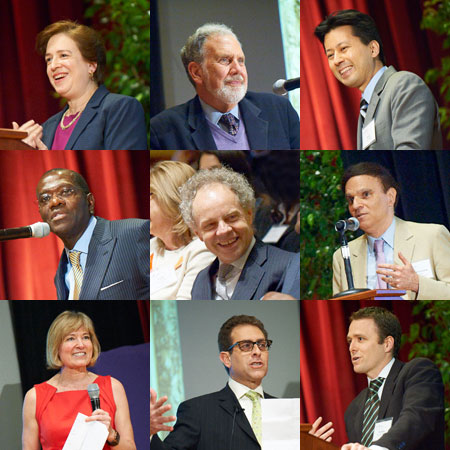 Nicholas Bagley ’05, an assistant professor at the University of Michigan Law School, offered his own story as an example of Revesz’s dedication to mentoring. The article that Revesz invited Bagley to co-author won an award from the American Bar Association and proved instrumental in beginning Bagley’s academic career. Recalling his doubts about collaborating with the dean on a subject he felt was beyond his ken, Bagley said that Revesz’s faith once struck him as “a kind of recklessness,” but that, in hindsight, “Ricky’s optimism isn’t misplaced, because he couples that optimism with a huge investment of his own time and energy. Maybe even more importantly, his optimism turns out to be a solid, really effective way of getting the people around him to step it up a notch, to be better than they think they could be.”

It fell to Kenji Yoshino to recite a detailed list of significant ways in which Revesz has transformed NYU Law—everything from scholarly excellence to globalization to physical expansion—though Yoshino specified his roster was far from exhaustive. But Yoshino’s most poignant point was about Revesz’s offer to him of the inaugural Earl Warren Professorship of Constitutional Law when he was recruiting him to come to NYU Law. Yoshino replied that he could not accept the title due to Warren’s support of Japanese American internment as California’s attorney general and governor during World War II, so Revesz said he understood, and then went back to do a little research. He subsequently offered Yoshino the revised title of Chief Justice Earl Warren Professor of Constitutional Law, explaining that, as Chief Justice, Warren had apologized for his earlier mistake. “He then mentioned that I might enjoy having a title that would remind me how much an individual can grow over a lifetime, and I knew then that I’d found my new dean,” said Yoshino. “I think you will all recognize many of Ricky’s character notes in that story: his keen problem-solving approach, his relentless energy, but most of all his humane wisdom.”

After a brief introduction by Anthony Welters ’77, chair of the Law School Board of Trustees, and the unveiling of the portrait, painted by distinguished artist Daniel Mark Duffy, Revesz offered his own words of gratitude to those assembled. “I’ve spent slightly more than half my life here at NYU Law School among the faculty, and I love this place,” he said. “So to be celebrated this way, and to know that my portrait will hang in Greenberg Lounge, is an enormous honor, and it makes me very happy. It was a great journey, not always easy, but always rewarding, because of the extraordinary people I got to work with every day.”