Patrick A. Bradford ’89’s path has led from Big Law to launching a new, Black-owned firm

On June 21, in his concurring opinion in the 9-0 decision National Collegiate Athletic Association v. Alston, US Supreme Court Justice Brett Kavanaugh cited an amicus brief co-written by Patrick A. Bradford ’89 and other Black antitrust lawyers. The Court’s unanimous decision declared some National Collegiate Athletic Association (NCAA) rules unlawful where they prevent Division I student athletes from receiving educational benefits, like post-graduate scholarships and paid internships. Kavanaugh’s opinion adopted some of the reasoning in the amicus brief, which was the only one cited, and drew on the brief’s argument that limiting additional benefits to student athletes is a type of illegal price fixing, Bradford says. 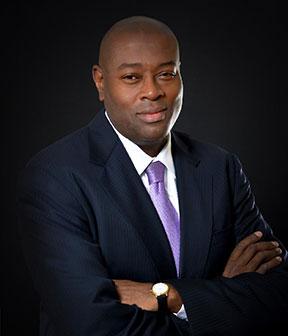 Writing the brief “brought together strands of some things I care about most in the world,” Bradford says, noting that he was motivated to get involved because of the impact of the NCAA rules on the Black students who represent a large percentage of college athletes. “We have a long history in this country of exploiting Black labor,” he says.

Bradford, a founding partner of the new, Black-owned firm Bradford Edwards & Varlack, and an adjunct professor of antitrust at Fordham Law School, has spent his career specializing in complex commercial litigation and investigations, and advocating for the Black community. After clerking for Judge Clifford Scott Green on the US District Court for the Eastern District of Pennsylvania, Bradford began his career in 1990 at Davis Polk & Wardwell, where he worked as a litigator for 20 years. In 1998, Bradford became the firm’s first Black partner.

Raised in Alabama, Washington, DC, and Maryland, Bradford says that there was a reverence in his family for lawyers—his brother Robert T. Bradford ’90 is also a graduate of the Law School—but his passion was theater, particularly Shakespearean drama. After earning his undergraduate degree at Harvard University, where he served as president of the Harvard-Radcliffe Black Community Student Theater, he enrolled at NYU Law in part to be close to New York’s vivid theater scene. At the Law School, Bradford says he was “bitten by the bug” of corporate litigation after taking a corporations course, but his interest in theater remains as strong as ever. Currently, Bradford serves as chairman of the board of the Classical Theater of Harlem, where he lives, trustee of the Oregon Shakespeare Festival, and is a contributing editor for Black Masks magazine, which comments on Black theater.

“Patrick has a primary interest in promoting the legacies and lives of people of color, helping them to achieve a level of equity in our country, enhancing their work, and bringing it to the fore of public attention,” says Robert Holmes ’69, who first met Bradford when Holmes spoke at a Black Allied Law Students’ Association (BALSA) event at NYU Law and Bradford was serving as president of the law school’s Law Alumni of Color Association (LACA). Holmes, a now-retired entertainment lawyer and former executive vice president of Sony Pictures Entertainment, says that he and Bradford have worked non-professionally on a number of art-related enterprises, including promoting the Black artist James C. McMillan. “Patrick does NYU Law proud,” says Holmes.

After NYU Law, Bradford says he felt a bit of trepidation about joining the white-shoe firm Davis Polk, but during his clerkship, Judge Green convinced him to take the step. “He told me that the opportunity to work in this kind of firm, historically, was one that had been closed to African Americans for many, many years, and that I should take the opportunity and make the most of it,” says Bradford. He says his time at Davis Polk was marked by incredible mentorship, and he points to senior partner Arthur Golden ’69 as an important teacher at the firm.

“The great thing about spending that much time at an institution where the lawyering is so superior is that you forever know what the legal standard of excellence is,” says Bradford. At Davis Polk, Bradford represented Comcast and Emerson Electric Co. in antitrust matters, and served as counsel in numerous cases before the Federal Trade Commission, including representing the consumer goods company Benckiser N.V. in connection with the company’s $3.5 billion merger with Reckitt & Coleman.

In 2011, Bradford left Davis Polk for government service, eventually becoming general counsel of the New York State Office of Parks and then Chief Litigation and Ethics Counsel for the New York City Council. Deciding to get back into complex business litigation, Bradford moved to Pierce Bainbridge in 2018, where he worked for two years before starting his own firm.

“Patrick’s intellectual acumen is unsurpassed,” says Denver G. Edwards, a co-author of the NCAA amicus brief, who first met Bradford when he was a paralegal at Davis Polk. Bradford was exceptionally kind and a “beacon for other Black young lawyers,” recalls Edwards, who went on to obtain a JD from Boston University and work again with Bradford at Pierce Bainbridge. When the firm folded, they decided to take their clients and form a new firm where diversity and excellence are fused, he says. Camille Joseph Varlack, another colleague from Pierce Bainbridge, is the third founder and name partner of the new firm.

“It’s interesting how having your own law firm after 30 years and feeling confident about your professional skill set, how that changes your way of thinking about your success,” says Bradford. He attributes the success he has achieved to support from family, friends and teachers within the Black community, from his mother, his pastor and from mentors and role models who set standards for excellence. Pointing to Black teachers whom he says had a profound influence on his intellectual development—NYU Law’s A. Leon Higginbotham, Jr., Peggy Cooper Davis, and Paulette Caldwell, Harvard University’s Orlando Patterson, and Hammond High School’s Valeria Foster—Bradford cites President Barack Obama’s adage that personal accomplishments are communal.

“My success is through my Blackness, because of it,” says Bradford. “Because of what I’ve learned from Black culture, the Black church, and from the personal support and sacrifice I’ve received from my mother, and from my community’s elders, and others, who took time to teach and to mentor me.”

Next month, Bradford notes, he is scheduled to give the keynote address for the Antitrust Division of the Department of Justice’s 8th Annual Diversity Celebration. “I intend to encourage the hiring and training of more Black antitrust lawyers,” he says. “As I have said to others, antitrust law is, at base, about unfair competition. Historically speaking, no group in America is more acquainted with the concept of unfair competition than Black folks. We are particularly well-suited for this important work.”

“The curtain rises on a more inclusive Broadway, with some help from the Center for Diversity, Inclusion, and Belonging”
NYU Law website 9/24/21