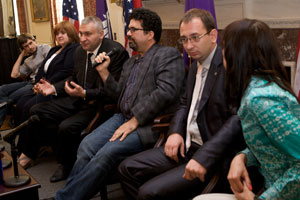 Lawyers for the imprisoned members of Pussy Riot, the Russian punk rock band, came to the Law School on September 21 to discuss their clients’ legal predicament, as well as the broader political climate in Russia. Titled “Pussy Riot and Protest: The Future of Dissent in Putin’s Russia and Beyond,” the event was organized by the Law School, including the student Art Law Society and the Center for Human Rights and Global Justice (CHRGJ), as well as the Department of Performance Studies and Department of Art and Public Policy at Tisch School of the Arts.

Performance artist and Tisch Arts Professor Karen Finley gave a sonorous reading of a poem she wrote in homage to Pussy Riot, and Suzanne Nossel, executive director of Amnesty International USA also appeared to voice her organization’s support for the band members.

In February, members of Pussy Riot performed what they called a punk prayer in Moscow’s Cathedral of Christ the Savior. The performance, which was turned into a music video, called on the Virgin Mary to “put Putin away,” referring to Russia’s President Vladimir Putin. In August, a court sentenced three of the band members (Maria Alyokhina, Yekaterina Samutsevich, and Nadezhda Tolokonnikova) to two years in prison for “hooliganism.”

Three of Pussy Riot’s defense attorneys, Mark Feigyn, Nikolia Polozov, and Violetta Volkova, as well as an assistant to the defense team, Alisa Obraztsova, attended the NYU Law event. They were also joined by Petya Verzilov, husband of one of the imprisoned band members. The event, in Greenberg Lounge, began with the showing of a video that featured still-free members of the band, clad in their trademark brightly colored balaclavas, decrying the arrest of the others and burning a giant portrait of Putin. Emily Kempin Professor of Law Amy Adler moderated the event, and Associate Professor of Clinical Law Smita Narula gave an introduction. Adler said that the Pussy Riot case “raises urgent questions in a diverse variety of fields,” including free speech law, art law, feminism, human rights, constitutional law, and international law. Narula, who is a CHRGJ faculty director, said that the prosecution of Pussy Riot band members had been compared to Soviet-era show trials, but also noted that we have seen repression of dissent “in our own backyard,” with Occupy Wall Street protestors subjected to “arbitrary arrest and detention, as well as police violence,” according to a CHRGJ report.