Three professors and two administrators are recipients of 2012 Podell Awards

At the Law School’s end-of-the-year dinner, Professors Daryl Levinson and Erin Murphy each received Albert Podell Distinguished Teaching Awards, and another was posthumously awarded to the late Professor Derrick Bell. Established in 2007 by Albert Podell '76, the awards recognize the outstanding achievements of faculty in the classroom.

Daryl Levinson, David Boies Professor of Law, is a leading expert in constitutional law and theory, and was also recently inducted into the American Academy of Arts & Sciences. When presenting Levinson's award, Dean Richard Revesz highlighted his attentive guidance of students as they pursue their own scholarship, describing him as an "excellent and generous mentor."

A nationally recognized expert in forensic DNA typing, Professor Erin Murphy focuses her research on the criminal justice system. Murphy teaches criminal law, criminal procedure, and evidence, and Revesz said that  “her level of engagement in and outside the classroom makes her an exceptional teacher.”

Derrick Bell's wife, Janet Dewart Bell, and past student, Lisa Boykin '95, accepted the award on his behalf. "Derrick touched the lives of countless students, who were inspired by his scholarship, activism, and teaching," said Revesz. "In his classroom, he created a safe haven for unconventional ideas and for students who otherwise felt alienated." 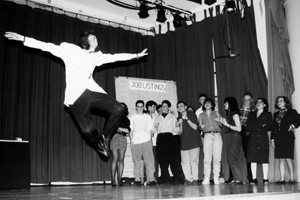 A member of the Law School community for 29 years, Dorzback has done a tremendous job of helping graduating students realize their career goals, even in tough financial times. The many students who have worked with Dorzback over her years at the Law School point to her tireless efforts on their behalf and her constant wise counsel. From her kindness and generosity to her yearly appearance in the Law Revue, Dorzback is key in making NYU Law the warm community that it is. "She spares no effort in encouraging students to dream big," Revesz said, "and to work hard to achieve those dreams." The dean also praised Solomon as a "quiet superstar" for providing career counseling, educational programming, and resource materials to over 500 domestic and international LL.M. students, as well as to J.D. and J.S.D. students.

In addition to the Distinguished Teaching and Administrator Awards, the Law School's generous friend, Al Podell, has also contributed to the faculty research fund, sponsored the moot court competition, funded prizes in oral advocacy and brief writing, and established the Albert Podell Global Scholars-at-Risk Fund to support foreign scholars, researchers, faculty, and intellectuals who face persecution in their home countries.