Leslie Cooper ’95 once got some advice from her onetime NYU Law Professor Thomas Stoddard ’77: Never stay in the same job for more than five years. But Cooper didn’t quite follow his guidance, as she noted wryly when she accepted the 2018 Alumna of the Year Award from OUTLaw, NYU Law’s LGBTQ student organization, at the organization’s Alumni Reception on January 24.

In 20 years at the American Civil Liberties Union (ACLU), Cooper has been a major leader in litigating for LGBTQ rights. Now a senior staff attorney with the ACLU LGBT & HIV Project, Cooper has worked on a wide range of issues including parental rights, the freedom to marry, employment discrimination, and access to healthcare.

In fact, Cooper said in her remarks at the reception, given the changes in LGBTQ rights legislation over the past two decades, she might as well have followed Stoddard’s five-year rule. Nearly every five years, major court decisions and the evolution of public opinion have completely changed the legal landscape.

Cooper’s docket at the start of her career included challenges to sodomy laws, equal protection cases on behalf of public employees, and suits against school districts that refused to recognize Gay-Straight Alliance clubs, as well as fighting for adoption rights for LGBTQ parents.

In 2003, after the US Supreme Court’s decision in Lawrence v. Texas, which struck down Texas’s sodomy law, “we sort of had a level playing field,” Cooper said. Building on that decision, Cooper served as lead counsel on litigation that successfully challenged laws in Florida and Arkansas that barred adoption by LGBTQ parents.

Five years later, the 2008 election of President Barack Obama “brought in a non-hostile federal administration,” Cooper said. When the Supreme Court legalized same-sex marriage in Obergefell v. Hodges in 2015, “it was a culturally transformative thing,” she said. That decision has had particular impact on her work in family law, making “life-changing differences” in the parenting opportunities for LGBTQ couples.

Now, Cooper said, the country is witnessing a backlash to the civil rights victories that have occurred in the past two decades, particularly in the “religious refusal” cases that are “trying to gut LGBT protections by creating religious opt-outs.” Recent years have also seen “horrendous anti-trans legislation,” such as bills focused on bathroom usage, Cooper said.

However, Cooper said she is optimistic about the movement for LGBTQ rights in the years ahead. Noting that the majority of her docket now consists of trans issues, Cooper argued that the task of LGBTQ rights lawyers going forward is to continue to use litigation and other forms of advocacy to move public opinion on trans issues. Already, she said, “public support for trans rights has never been greater.”

Trans rights were also among the topics explored at a panel discussion that was held prior to the award presentation. The panel, “Beyond the Binary: Legal Implications of Third Gender Options,” featured lawyers from organizations that included the Transgender Legal Defense & Education Fund, the Sylvia Rivera Law Project, Lambda Legal, and the New York City Commission on Human Rights. 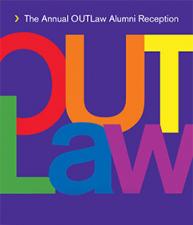 In his remarks at the award presentation, Dean Trevor Morrison noted that NYU Law has long taken pride in having been a leader on LGBTQ issues. In 1978, for example, NYU Law was the first law school to deny career service recruitment opportunities to employers who discriminated on the basis of sexual orientation. Subsequently, while the US military’s “Don’t Ask, Don’t Tell” policy was in effect, banning openly gay or lesbian service members from the armed forces, the Law School contributed to challenging (albeit unsuccessfully) the Solomon Amendment, which denied federal grants to universities that prohibited ROTC and military recruitment on campus.

“The Law School continues to strive to be a place where diversity is celebrated,” Morrison said, “and where people with different backgrounds, viewpoints, and modes of living are welcome and celebrated and help to lead this organization.”