To celebrate the dedication and formal renaming of the Dwight D. Opperman Institute of Judicial Administration, retired Justice Sandra Day O’Connor of the Supreme Court of the United States and Oscar G. Chase, Russell D. Niles Professor of Law and IJA Executive co-director, engaged in a conversation about protecting the independence of the judiciary. 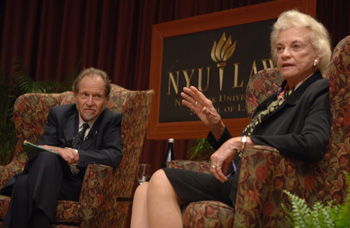 As the first woman confirmed to an ideologically polarized Supreme Court, O’Connor has endured more than her fair share of scrutiny, criticism and second-guessing. She has pleased and angered those on the left and the right, men and women. Often characterized as the “swing vote” in 5-to-4  rulings, she remained resolutely unpredictable, her opinions seem pragmatic more than adhering to a particular political stripe or ideology. More than most, O’Connor exhibited an independent judicial streak.

Now that O’Connor has retired, it is fitting that she has applied herself to protecting the independence of the judiciary. During the candid public conversation, O’Connor was always poised but sometimes combative as she described a judiciary that is literally under siege and ventured opinions as to what is fostering this antagonism and how the imperiled third branch of government might be protected.

Today, an atmosphere of “angst about judges,” as O’Connor termed it, seems to be encouraged by the idea that judges should be political, rather than serving as checks and balances for the legislative and executive bodies. Even the term “independent judiciary,” O’Connor says, has become negatively loaded. “We use the term independent because it’s in the constitution,” said O’Connor, who favors the more accurate description of “a fair, impartial and independent” judiciary.

In an op-ed published by the Wall Street Journal on September 27, 2006, O’Connor wrote, “An independent judiciary does not mean, of course, that it is somehow improper to criticize judicial decisions. To the contrary, it is a healthy sign for a democracy that the public is engaged with the workings of the judicial system.”

During her conversation at NYU, O’Connor ticked through a list of state actions that she felt impinged upon the independent nature of the judicial branch. Judicial elections top her list of threats to independence. Colorado has cut the terms of appellate judges in half so elections and reshuffling occur more often to suit political groups’ agendas. Repeated attempts to dismantle Arizona’s method of judicial appointments, rather than elections, have been tried as well. “Our country can do better on judicial selection,” O’Connor said.

Politically motivated limitations placed on the jurisdiction of courts have also become a dangerous trend within the past few years. O’Connor referred to the Terry Schiavo case as a unique intervention by Congress and President Bush to take special measures and force one hot-button case to federal courts.

Most disturbingly, however, O’Connor cited Jail 4 Judges, the purposefully menacing name for a California-based interest group that had placed an amendment on South Dakota’s November ballot to eliminate judicial immunity and allow judges to be censured. Judges could have even been subjected to jail time for making “wrong decisions.” In the midterm elections subsequent to O’Connor’s visit, South Dakotans defeated the amendment.

O’Connor’s main idea for combating the growing negativity toward judges was simple: Bring back civics education. Ignorance about how our government works, she believes, is the root of the problem. Only one-third of Americans, she cited, are aware of the judiciary branch at all. “No one knows what we do,” she said.

O’Connor seemed confident that a review of the Court’s most historic cases would demonstrate the value of independence. Take Brown v. Board of Education. By deciding that “separate but equal” should not apply to public education, the Court began a domino effect that overturned laws promoting racial segregation.  “It was an unbelievable, necessary step, and trying to enforce it was hard,” she said. “But today, it’s history.”