When Norman Goodman ’50 took the position of New York County Clerk in 1969, he had “not the faintest idea” that running this office would become his life’s work. Goodman stepped down from his job of 45 years this past December, on the day of his 91st birthday. In a conversation with Dean Trevor Morrison at this year’s Law Alumni Association Luncheon, Goodman regaled the audience with anecdotes from his time in the county’s courts. 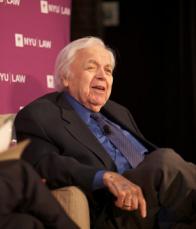 Over the course of his many years as commissioner of jurors, Goodman called every manner of New Yorker to jury service, including celebrities and politicians such as film director Woody Allen and Rudy Giuliani ’68 while he was in the office of the mayor. Allen, Goodman noted, refused to sit down in the hall where jurors were waiting to be called, choosing to stand instead, and, predictably, causing a ruckus. Giuliani, on the other hand, served on a jury—and invited his fellow jurors to dine afterwards at Gracie Mansion.

Goodman also made sure to participate in the process—“I called myself,” he said. Although he was sure to do his civic duty, Goodman said that his inside knowledge of the jury system came with its advantages. In one instance, he and other members of the jury found the defendant guilty unanimously, resolving the vote at 11:45 am. He suggested to the other members of the jury, however, that they delay announcing the verdict—“I told them, if we wait another 15 minutes, we’ll get lunch,” he said.

In addition to calling jurors, Goodman worked with then-Chief Judge Judith Kaye ’62 to reform the jury system, and oversaw the digitization of New York County’s court records. The court is also home to historical documents reaching back to the days of Dutch colonial times, and the American Revolution, which Goodman has worked to preserve with the help of two archivists.

Asked by Morrison to illuminate any heroes or villains from the office’s history, Goodman pointed back to Augustus Van Cortlandt, who was the last clerk to hold the office under British rule. When Washington and his troops were marching on New York, Van Cortlandt sent three years worth of records aboard a British ship anchored in the harbor. The records ended up in the British Library, and were eventually auctioned off as antiques. To this day, the office is missing the records from 1773-1775.

Although he has stepped down from his long-held position, Goodman is not entirely done with the office of New York City Clerk; in his retirement, he plans to work on a book about the history of the office.