Norman Dorsen, Frederick I. and Grace A. Stokes Professor of Law, passed away on July 1, 2017, at home with his family. Over the course of his nearly 60-year career at NYU Law, Dorsen established the Law School as a world-class institution of higher learning. He inspired generations of graduates to pursue careers in the pursuit of civil rights and civil liberties; engaged with faculty colleagues on scholarship, governance, and questions of institutional quality and identity; and counseled numerous deans and one University president. 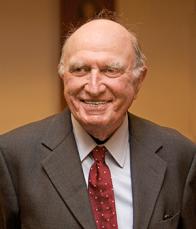 In a statement to the NYU Law community, Dean Trevor Morrison said, “Perhaps no one else in the history of the Law School has shaped this place as profoundly, or affected it as deeply, as Norman. Most important, he had forged deep friendships with his colleagues and former students and was a model for a life of commitment and passion in the pursuit of legal excellence.”

After graduating from Columbia College and Harvard Law School, where he served as an editor of the Harvard Law Review, Dorsen began his legal career working in the Office of the Secretary of the Army during the 1954 Army-McCarthy hearings, where he was charged with preparing memoranda and other documents required during the weeks of televised testimony.

Upon leaving government service, Dorsen attended the London School of Economics on a Fulbright Scholarship and then clerked for Chief Judge Calvert Magruder of the US Court of Appeals for the First Circuit and Justice John Marshall Harlan II of the US Supreme Court. In March 1961, he joined the NYU Law faculty as a professor and a director of the recently founded Arthur Garfield Hays Civil Liberties Program. He quickly became the soul of the program, which he continued to co-direct, together with Elizabeth K. Dollard Professor of Law, Medicine and Psychiatry Sylvia Law ’68 (herself a Hays Fellow) and Herbert M. and Svetlana Wachtell Professor of Constitutional Law and Civil Liberties Helen Hershkoff, until his death.  Thanks to his fierce dedication and generous mentorship, the Hays Program has prepared hundreds of fellows to pursue careers in in the public interest, including as leaders at organizations taking on the most challenging civil rights and civil liberties issues of the day.

Dorsen was an unparalleled institution builder, and at NYU Law he shared generously of his energy and skill in this regard. Over the course of his career, Dorsen wrote reports that revised the required curriculum; provided guidelines for the Academic Personnel Committee; structured the clinical program; recast the LLM and JSD programs; reformed the grading system (three times); set procedures for appointing and evaluating adjunct professors; and instituted elective courses in the first year. Through this work, Dorsen made a vast and indelible impact on the Law School’s intellectual life and legal education. On top of all this, and in addition to developing the Hays Program, Dorsen served for 40 years as director of the James Madison Lecture Series and, in 1995, was the founding director of the Hauser Global Law School Program. Through these efforts, Dorsen helped establish NYU Law as a hub for the study of constitutional and other public law, and as a national leader in the incorporation of non-US and transnational legal perspectives throughout the curriculum. From 2001 to 2015, Dorsen also acted as counselor to then–NYU President John Sexton, Dean Emeritus and Benjamin F. Butler Professor of Law, providing guidance to Sexton as he established NYU as a global university.

Dorsen’s energy and ambition were boundless, and notwithstanding his many commitments at the Law School, he remained active throughout his career in many institutions outside of NYU.  He was a steadfast advocate for civil liberties and civil rights, serving as general counsel of the American Civil Liberties Union (ACLU) from 1969 to 1976 and as its president from 1976 to 1991. Dorsen appeared six times before the US Supreme Court and was integral to the advancement of reproductive rights in the 1960s and ’70s, arguing the first abortion rights appeal heard by the Court and serving as counsel of record in Roe v. Wade. He also argued In re Gault, which established that juveniles accused of offenses in delinquency proceedings must be afforded the same due process rights as adults facing criminal charges. He wrote briefs in countless other history-making cases, including Brandenburg v. Ohio, Gideon v. Wainwright, and the Pentagon Papers and Nixon tapes cases. He was the chairman of the Lawyers Committee for Human Rights (Human Rights First) and a trustee of the Thomas Jefferson Center for the Protection of Free Expression. Dorsen also was active in the development of scholarship and pedagogy, delivering at least 15 named lectures at law schools and universities; co-editing three casebooks and writing 11 other books; and serving as the founding editorial director and, until 2008, editorial director of the International Journal of Constitutional Law (I•CON) and the founding president of the Society of American Law Teachers.

Over the course of his career, Dorsen received many honors. They include the Eleanor Roosevelt Human Rights Award, conferred on him by President Clinton in 2000; the first triennial award of the Association of American Law Schools for lifetime contributions to the law and to legal education, given to Dorsen in 2007; and honorary degrees from Ripon College and the John Jay College of Criminal Justice. The Summer 1992 issue of the Harvard Civil Rights-Civil Liberties Law Review, the 2001 volume of the Annual Survey of American Law, and the 2010 and 2011 volumes of the International Journal of Constitutional Law were dedicated to him as well.  Several awards have also been named after him. The ACLU first awarded the Dorsen Presidential Prize, presented biennially to a full-time academic for outstanding lifetime contributions to civil liberties, in 2013. To mark Dorsen’s 50th year of teaching at NYU Law, the Law School renamed Vanderbilt Hall Room 202 the Norman Dorsen Seminar Room. NYU Law also announced the creation of a chaired professorship in Dorsen’s honor: the Norman Dorsen Professor of Civil Liberties. Dorsen’s friend and longtime NYU and ACLU colleague Burt Neuborne is the inaugural chairholder. Finally, the Hays Program has endowed a fellowship in Dorsen’s name, awarded for the first time to a fellow who will serve in the 2017­–18 academic year.

Dorsen’s family was foremost in his heart. His wife, Harriette Koffler Dorsen ’66, to whom he was deeply devoted, passed away in 2011. He is survived by his brother, David; three beloved daughters, Jennifer, Caroline, and Annie; and four grandchildren.

Said Morrison, “Together, we extend our heartfelt condolences to Norman’s family. I join his longtime colleagues, friends, students, and collaborators in sadness at his death and in deep gratitude for his remarkably impactful and rich life.”