Nicholas Melvoin ’14 did not originally plan to go into the law. Rather, he thought he would spend his career as a teacher, and perhaps eventually a school administrator. Melvoin's interest in education began in high school, when he volunteered at a camp for homeless children. “I kind of realized at that point that there was this disparity between the school that I was going to, which was a private school in the west of LA, and the schools that these kids were going to,” Melvoin says. 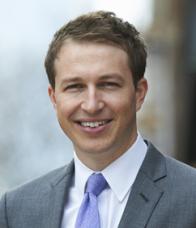 When he graduated from Harvard College in 2008, Melvoin joined the ranks of Teach for America (TFA), teaching seventh and eighth graders at Markham Middle School in Los Angeles. “In my mind, the greatest civil rights struggle of our generation is educational inequity,” says Melvoin. “So I thought teaching, and being on the front lines of that struggle, was really the best way to address it.”

But his career plans began to change when, after his first year at Markham Middle School, Melvoin lost his job as part of district-wide budget cuts. Due to California seniority statutes (referred to as “Last-In, First-Out,” or LIFO Statutes), newest teachers are the first to be laid off.

“My school was decimated by these layoffs. They laid off 67 percent of our staff,” Melvoin says. The following year, Melvoin returned to teach at the same school—only to be laid off again. Seeing the negative effects of this policy on his school, Melvoin worked with the ACLU to bring a lawsuit on behalf of his students. In Reed v. California, the ACLU successfully argued that the seniority-based layoffs that year at several schools in Los Angeles violated the constitutional rights of the students to equal opportunity to access quality education.

Melvoin has stayed in touch with his students at Markham Middle School, and also continues to serve as co-director of the camp for homeless children that he has worked at since high school. However, disillusioned after his experience with LIFO layoffs and reinvigorated by the success of the Reed v. California case, Melvoin began to consider how to address the question of education inequality through the law, rather than the classroom. Attracted by NYU Law’s strong tradition of public service and the work of faculty members such as Bryan Stevenson and Kenji Yoshino, Melvoin headed to the Law School as a Root-Tilden-Kern scholar.

As a law student, Melvoin has continued his work in education reform, serving as chair of the Education Law Society, and studying with Professor Paulette Caldwell, an expert in education law. During the summer after his 1L year, Melvoin headed back to LA to intern at the ACLU, where he worked on statewide education litigation and policy. The following summer, Melvoin worked at the White House on the domestic policy council team, focusing on civil rights and criminal justice reform. As editor-in-chief of the Review of Law and Social Change, Melvoin also helped organize a conference on diversity in education and the future of affirmative action.

But his most recent achievement in the legal battle for education reform came this spring, when Melvoin was asked by the lawyers for the plaintiffs in Vergara v. California to go back to Los Angeles to testify about his experience with LIFO layoffs. The suit, filed on behalf of nine students in the California public school system, was argued by some of the same lawyers who argued the case against California’s Proposition 8: Theodore Boutrous Jr. and Theodore Olson, who is also a member of the Dwight D. Opperman Institute of Judicial Administration’s board of directors. The case specifically challenges California’s permanent employment statutes, dismissal statutes, and LIFO statutes.

“The LIFO statute forces layoffs… to be concentrated primarily in schools serving high need communities because—as everyone agrees—these schools 'tend to have high proportions of inexperienced teachers,'” wrote Boutrous in the final brief submitted on behalf of the plaintiffs in the case.

Melvoin was one of several teachers who testified to the harmful effect of LIFO layoffs on California schools. Although he was not arguing the case, Melvoin says that his involvement in Vergara felt like a good capstone to his time in law school. “In the last semester, to go back to LA… to read the briefs, and keep my thumb on the pulse of the trial, and understand more what people talked about as a result of law school… was really rewarding,” Melvoin says—although when he testified, there were still a few aspects of the courtroom that he had yet to learn in class: “It was actually funny, because I got up, and the lawyers said, ‘you know the hearsay rules,’ and actually the day that I was testifying I was missing an evidence class where we were learning hearsay.”

Despite missing the class, Melvoin says that the mentorship of his NYU Law professors was extremely helpful during his involvement with the Vergara case, particularly that of Kenji Yoshino, Chief Justice Earl Warren Professor of Constitutional Law. “I think he’s a kind of unofficial mentor to all of us public interest students,” says Melvoin, “but especially over the course of this trial… he’s someone I’ve been able to turn to with questions.”

“Nick reminds me, as many of our students do, of how much our students can inspire and teach us as faculty. His poise on the witness stand in the Vergara case would be the envy of any professor, much less student,” says Yoshino. “When we discovered he was friends with my friend’s daughter, I asked how he knew her. He said they had volunteered together for a camp for the homeless. I said: ‘Of course you did. You should be in a museum.’”

Drawing on his experiences with the Reed and Vergara cases, Melvoin is writing his senior note on education litigation, under Caldwell's supervision. “His commitment to public service is infectious, and he will leave a memorable mark on the field of educational leadership and the other areas of public concern that command his attention,” she says.

Following his graduation from NYU Law, Melvoin will continue in the field of education rights as director of policy, communications, and legal counsel of Great Public Schools: Los Angeles. A new education start-up, GPS:LA is working to put together a coalition to elect reform-minded candidates to the Los Angeles school board—the governing body of the second-largest school district in the country.

“I’m very excited about going back to work on behalf of children in Los Angeles,” Melvoin says. “That’s what catalyzed my interest in law school.”