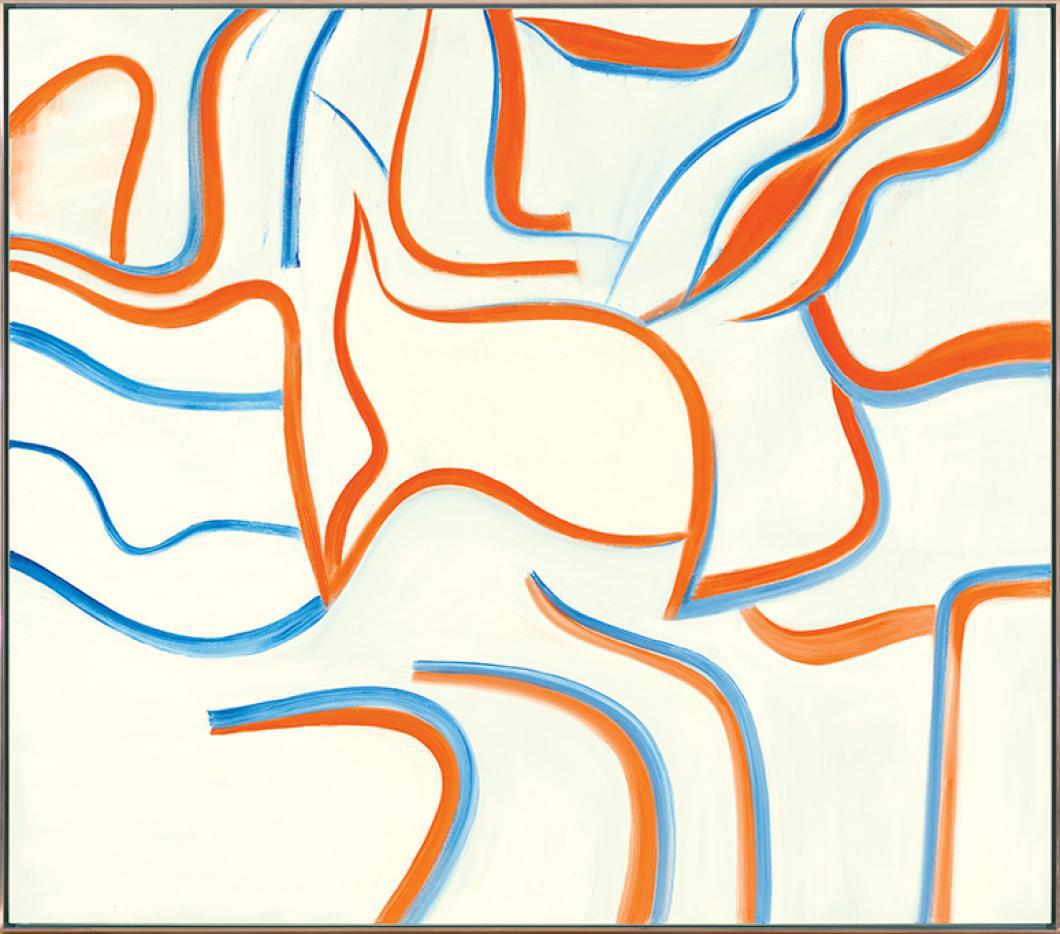 The Willem de Kooning Foundation loans NYU Law a painting by one of the most celebrated artists of the 20th century.

When you pass through the NYU Law Library’s main entrance, the circulation and reference desks are on the right; straight ahead is the main staircase. Turn left, and you’ll encounter something less typical: a 70-by-80-inch painting by Willem de Kooning (1904-1997), whom the Museum of Modern Art (MoMA) has deemed “among the most important and prolific artists of the 20th century.” The Key and the Parade (1985), which features bold, sweeping red and blue lines curving and intersecting within tinted whites, immediately catches your eye. Like a sky full of cloud formations, the painting contains figures that lend themselves to shifting interpretations. Federal Rules of Civil Procedure it is not.

The idea of installing a work by one of the major Abstract Expressionists inside a law school library originated in conversations between Dean Trevor Morrison and John Eastman ’64. Eastman, who was de Kooning’s lawyer, co-executor, and co-conservator and serves as co-president of The Willem de Kooning Foundation’s board of directors, facilitated the connection between the Law School and the de Kooning Foundation.

“Lending partners come in many forms,” says Amy Schichtel, the foundation’s executive director. “While we provide works to many renowned institutions and venues such as the Pinakothek der Moderne in Munich and the Louvre’s Tuileries, we also seek out locations where de Kooning’s work may be seen by wider and more varied audiences, in more public and accessible settings—such as a public square in Rotterdam, a university campus, and, in this case, NYU Law’s library. The Law School has revealed a keenness to experiment with how de Kooning’s painting and thought on law may coincide. This is a creative spirit that well reflects de Kooning’s own.”

Morrison consulted with Emily Kempin Professor of Law Amy Adler, a widely recognized art law expert, in selecting The Key and the Parade. The painting has hung previously in NATO Headquarters; Truman Hall, the Mission Residence of the US Ambassador to NATO in Brussels; and the office of the under secretary for public diplomacy and public affairs at the US Department of State in Washington, DC. It will be on loan to NYU Law for two years, and the Law School and the de Kooning Foundation will collaborate on programming involving the painting during that time.

“It’s a bold experiment and very inspiring,” says Adler of the loan. “Although [de Kooning’s] work is lush and beautiful, he was also an intellectually rigorous artist, challenging himself with problems to solve artistically in a way that makes him particularly interesting for us.”

The Key and the Parade received an official welcome to the Law School at a reception in the library on October 1. In his opening remarks, Morrison considered the potential effect the striking artwork might have on passers-by.

At the ceremony, Eastman shared his thoughts about the links between law and art. “I’ve long held the belief—nurtured actually in this room by my mentor at the Law School, Norman Dorsen—that the law at its best really has an elegance intellectually.” Recalling his long association with the artist, Eastman called de Kooning “the most original mind I ever met. What he would do is take a problem—the most complex of problems, especially artistic problems—and turn them around about 180 degrees and work his way out of them, and sometimes he almost couldn’t…. My guess is great lawyers did that.”

John Elderfield, chief curator of painting and sculpture emeritus at MoMA and a de Kooning expert, noted that de Kooning had used the term “slipping glimpses” in relation to his own work. “He talks about how, when you enter a room or you’re on the street, you don’t perceive it as if you were in some kind of Renaissance perspective. You don’t see the whole room at once—you see pieces of it…. His paintings are both representations of slipping glimpses and encouragements of the viewer to look at them in that way.” Many NYU Law students hurrying to and from class are destined to encounter The Key and the Parade from exactly that perspective.

Elderfield recalled escorting Bob Dylan through a de Kooning retrospective at MoMA in 2012. Witnessing the continual shifts in de Kooning’s style, the musician had said to Elderfield, “He keeps changing.” Similarly, Eastman suggested that NYU Law’s history of innovation makes it “the perfect Petri dish” for the de Kooning experiment: “Maybe we can develop a matrix to have some idea of what effect great creativity has on great legal minds.”