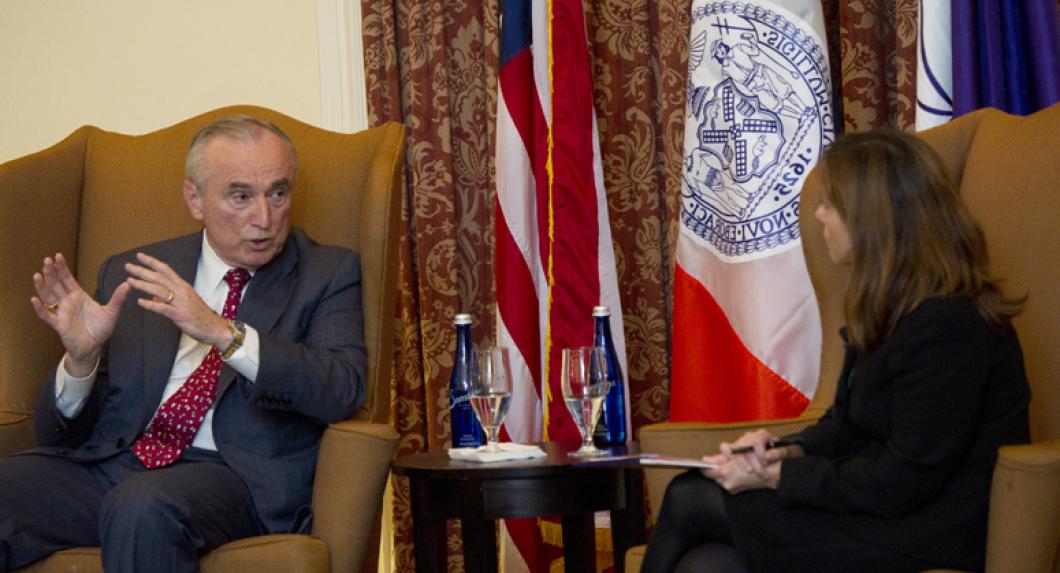 On Monday night, New York Police Department (NYPD) Commissioner William Bratton spoke at NYU Law about new approaches to curbing crime and improving safety in New York City as part of the Center on the Administration of Criminal Law’s ongoing series on urban crime. Following his speech, Segal Family Professor of Regulatory Law and Policy Rachel Barkow led a Q&A session in which she asked Bratton about steps that the NYPD is taking to change police practices.

Bratton's appearance came at a time of rising concern about police killings. The previous week, a rookie police officer killed an unarmed man in a Brooklyn housing project; a grand jury in New York is reviewing a police choke hold death on Staten Island this summer; and only hours after Bratton spoke, authorities announced that at grand jury had declined to approve charges against a Ferguson, Missouri, police officer who shot an unarmed 18-year-old, Michael Brown.

Government’s first obligation to its people, Bratton said, is public safety. “And the reality is that the city has never been safer in modern times,” he said, pointing out that crime statistics in New York have been on the decline for 24 years straight. But despite this, he said, “To read the tabloids, you’d think we were in the middle of Dodge City.”

While castigating the politicized and sensational reporting of crime, Bratton also conceded that fear of the police remains a real issue, particularly in minority communities. “In a city that has been made so much safer, how do we get back trust—if we ever had it?” Bratton said. As an indication of that loss of trust, Bratton’s speech was interrupted by protestors, who stood up from the audience and chanted, “Hands up, don’t shoot”—the refrain that developed in response to the Brown shooting.

Bratton pointed to changes in police practices that he believes will improve relations between police and the community. One important step that the NYPD has taken, Bratton said, is curtailing police use of "stop-and-frisk." In 2012, there were over 500,000 New Yorkers stopped by the police as part of this program; in 2014 so far, there have been fewer than 50,000 stops.

When asked about the potential for use of police body cameras to monitor police interactions, Bratton called cameras a “great tool,” but cautioned against viewing their use as an “end-all solution” to problems in policing. One key hurdle that must be considered, he said, is their expense: there are 22,000 police officers in the NYPD, and to store video footage could cost as much as 100 dollars per month, per camera.

Bratton also emphasized the significant training reforms that are underway. Using the Los Angeles Police Department as a model, rookie police officers will now be assigned to patrol with a more seasoned officer, a change from practices in which as many as 12 rookie officers could be assigned to one sergeant, and sent into the most difficult districts in the city. However, Bratton cautioned, changing the system takes time. The police academy graduates 900 new officers each year, and finding the more experienced officers to work with rookies will require training, as well as union negotiations.

Despite these challenges, Bratton, who had also been NYPD commissioner from 1994-96 under Mayor Rudolph Giuliani '68, expressed confidence that the police department will be able to improve relations with the community, even as it continues to keep crime-rates in the city at an all time low. “I’m an optimist—I wouldn’t have come back into this position for a second time if I was not an optimist,” he said.

He will have his work cut out for him. On Tuesday night, members of NYU's Black Allied Law Students Association (BALSA) planned a discussion of the Ferguson, Missouri grand jury decision timed so that the group could afterward join city-wide protests in Manhattan's Union Square.

“Excessive force is a staple in communities across the country, and the officers who employ it are reflections of policies that condone its systematic use,” BALSA wrote in a statement to the community. “The work of creating a system of law enforcement and criminal justice that values and respects the lives of all citizens must start in earnest now.”