For the Sake of Argument: NYU Law’s Moot Court Board creates problems other law schools want 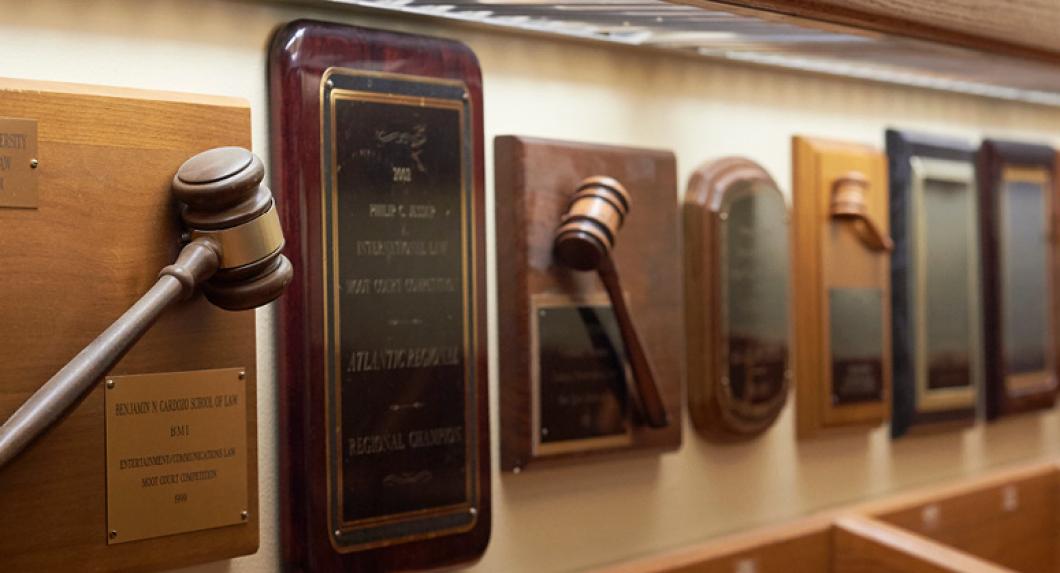 At NYU Law, the Moot Court Board is classified not as a student organization but as a student journal, a unique arrangement for a top law school. Besides competing in moots nationally and hosting an innovative competition annually, what puts the board in a class by itself is the Moot Court Casebook, published each year since 1976.

“It turned out that there’s an enormous need for high-quality, non-preempted moot court problems,” says Alec Webley ’16, the Moot Court Board’s current editor-in-chief. “This is partially because the Supreme Court tends to pick the most interesting problems every year and delete them. So you’re continually having to generate new material.” All 86 members of the board work on aspects of the casebook, with 30 taking casebook editor titles and contributing to the writing and line-editing. More than 150 law schools currently subscribe, making NYU Law’s moot problems among the most widely disseminated in the country.

The casebook editors hone their research and writing skills. “When you’ve graduated from Moot Court, you will have written several briefs that are dealing with much the same content and substance as you’ll be doing in practice,” Webley explains. “You’ll have written several memos that engage in thoughtful but useful and easily digestible analyses of existing problems that are being litigated.”

Alicia Berenyi ’16, a competitions executive editor, stresses the larger importance of these exercises: “The skills that you get in Moot Court help you succeed in any workplace. A lot of it is about confidence and articulating yourself and having good presence.”

The Moot Court Board not only travels to competitions, but hosts one of its own. Rupita Chakraborty ’16 is executive editor of the Immigration Law Competition, an annual external moot court competition. Dedicated to cutting-edge immigration law issues and judged by practice-area professionals, the competition is the only one of its kind in the US.

Prominent board alumni include Eileen Decker ’89, US attorney for the Central District of California; Brendan McGuire ’02, chief of the Terrorism and International Narcotics Unit in the US Attorney’s Office for the Southern District of New York; and Jesse Wegman ’05, a New York Times editorial board member. But none is a more active champion of the board than Albert Podell ’76, who has attended the final argument of the Orison S. Marden Moot Court Competition, NYU Law’s two-semester internal moot court competition, nearly every one of the past 35 years.

Podell, who participated in Marden as a 2L, established the Albert Podell Award for Best Oral Advocate the year that he graduated. The awards now include Best Brief Writer and Moot Court Board Advocacy Award as well. He also endowed what is now called the Albert Podell Moot Court Board Office. But his most visible contribution may be a spontaneously donated massage chair that is one of the office’s most popular features.

All this generosity stems from Podell’s appreciation of the skills he learned through mooting. “As I started to practice law, I realized that talking to the judge, either from a distance or at a bench conference, was really important,” he says. “Moot court provides very good training for how to address the bench. I understand it’s meant for appellate work, but it also can be extremely helpful for general demeanor in front of the court.”

“We think of competitions not as the capstone of what we do but as the foundation for everything else we do,” says Webley. “The point is to have a good educational experience rather than earn hardware—though we do earn hardware, and we’re glad to.”

"A Moot Court of the Highest Order"
NYU Law magazine, 2009