US Securities and Exchange Commission (SEC) Chair Mary Jo White, who will step down from one of the longest chairships in SEC history when President Obama leaves office, delivered a comprehensive speech at NYU Law encompassing changes she has pursued during her tenure and potential future developments for her agency. 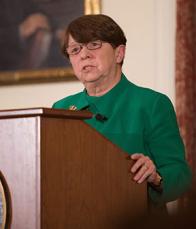 In “A New Model for SEC Enforcement: Producing Bold and Unrelenting Results,” co-sponsored by NYU Law’s Program on Corporate Compliance and Enforcement and NYU’s Pollack Center for Law & Business, White talked about the SEC’s enforcement activities since her appointment in 2013. The agency’s priorities in the ensuing years, she said, have included a new “investigate to litigate” philosophy emphasizing the need for staff to investigate potential wrongdoing with an eye to producing a trial-ready record.

White also described an increase in the use of data analytics and whistleblowers to detect and investigate misconduct, and a continuing focus on charging individuals as well as companies with white-collar crimes. During her tenure, she said, the SEC has also bolstered the deterring effect of settlements by requiring admissions of wrongdoing, and adopted new rules and approaches regarding equity market structure and both private equity and public finance enforcement.

“By every measure, the SEC’s enforcement program has been a resounding success,” said White. “While numbers are a small part of the story, in the last three fiscal years, we have brought record numbers of enforcement actions, obtained unprecedented monetary remedies in the billions of dollars, and returned hundreds of millions of dollars to harmed investors.”

White underscored the difficulty of prosecuting these cases. “Unlike our colleagues at the Department of Justice,” she said, “we generally proceed without the benefit of cooperators, wiretaps, and many of the other tools prosecutors have. Our litigated cases, which are typically technically complex, also require us to heavily rely on circumstantial evidence, confront hostile witnesses, and refute testimony by the defendant—a much rarer occurrence in criminal cases.”

White, nearing the end of her chairship, stressed the ongoing need for vigilance. “Regulators and prosecutors worldwide are especially struggling with how best to deter what seems to be a persistent, post-financial crisis pattern of corporate wrongdoing at our major financial institutions.” Despite the need in some areas for increased authority, coupled with relentlessly shifting market technology, she said, the SEC must remain “the tough cop on the financial beat.”

Watch the full video of the lecture (44 min):