A cry of “All rise!” brought the crowd in Greenberg Lounge to its feet on April 9 as final arguments in NYU Law’s 40th annual Orison S. Marden Moot Court Competition got underway. Presiding over the fictional case of Fitts v. United States of America were three real-world members of the bench: U.S. Supreme Court Associate Justice Sonia Sotomayor, Judge Jeffrey Sutton of the U.S. Court of Appeals for the Sixth Circuit, and Judge Raymond Lohier Jr. ’91 of the U.S. Court of Appeals for the Second Circuit. 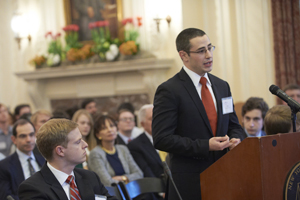 The case, prepared by Moot Court Board members Jerilyn Laskie ’13 and Nicole Geoglis ’13, centered on the child-pornography conviction of one Ezra Fitts, and presented two issues for the moot Supreme Court to review. Zachary Briers ’12 and David Hodges ’12 squared off on the first, involving the sufficiency of probable cause for the search that led to Fitts’s arrest. Thomas Bennett ’12 and Paul Brachman ’13 debated the second: whether a court could properly order Fitts, who was convicted only of possession of child pornography, to pay restitution to the victim depicted in those materials.

As is common in the real Supreme Court, each of those arguing met rapid-fire questions from the justices. At one point, Sotomayor asked Briers whether he rejected the Eighth Circuit’s position on an issue relating to search warrants, and Sutton then pressed Briers on the matter. “Do you concede the Eighth Circuit’s wrong?” Sutton asked. “No skin off your nose,” Sutton joked after Briers offered a hesitant yes. “I had to think about who is on which circuit here,” Briers responded, causing the room to erupt in laughter.

While the justices deliberated, Dean Richard Revesz announced the Albert Podell ’76 Awards for those students who had been involved in the Marden competition throughout the academic year. The justices then returned to name Brachman as Best Oralist. “We pick one person,” said Sotomayor, “but there really shouldn’t be any losers because each of you has done an extraordinary job.” 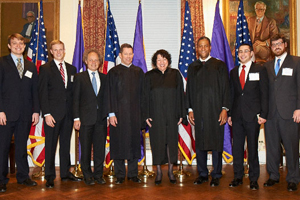 Lohier was likewise impressed: “I think it’s fair to say that, based on what I saw this evening, you’d do exceptionally well before the Second Circuit. I think that the most important thing, besides candor—never forget candor in your responses—is to listen to the question and to answer the question. All four of you were able to do that in a very professional way.” Lohier is currently an adjunct faculty member at NYU Law, and Sotomayor is a former adjunct at the Law School.

“Why do I bother doing a moot court—adding another case to my docket?” Sotomayor asked as the event drew to a close. “I do it because, after I engage in an exercise like this by students, I’m inspired. I’m inspired because I know that those who are following in the job I love so much—lawyering—are being trained so well that you give me hope, both about the profession and about the future of the profession and my job.... The essence of any argument is to have a theory of your case and stick to it, and each of you did that brilliantly. You do inspire me to have hope about what is the beauty of this art, because arguing is an art.”