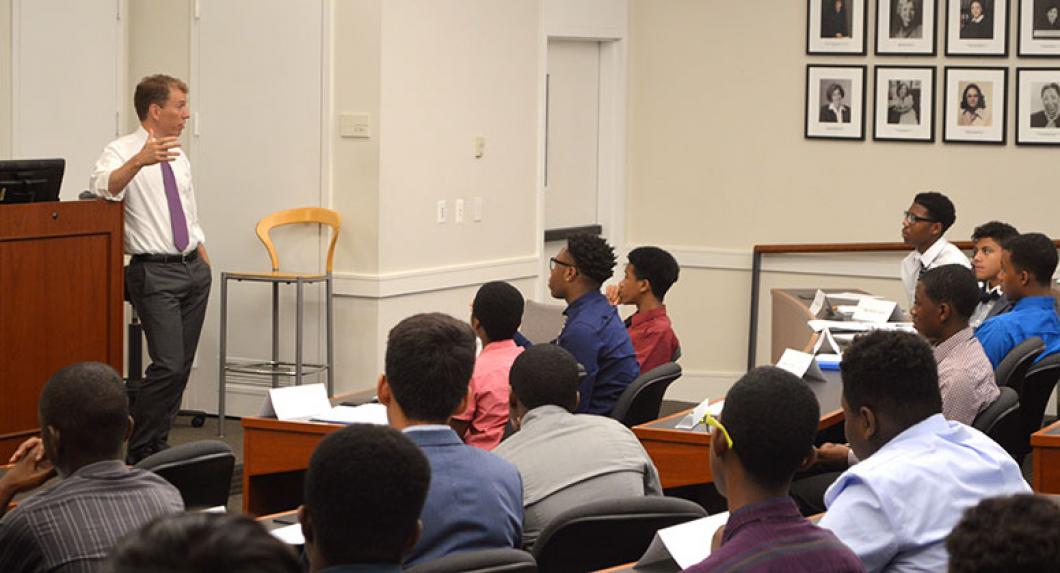 On a muggy July morning, Dean Trevor Morrison was explaining to a classroom of students the fundamentals of constitutional law. The young people kept their eyes on the dean; no one looked at a phone or laptop.

Posing a question about affirmative action, Morrison called on a student in the back of the room. The student stood and confidently gave a well-reasoned, clearly expressed answer. Had he seemed nervous, it would have been understandable; he had only recently finished eighth grade.

Legal Outreach, a nonprofit organization that prepares underserved New York City youth to compete academically, has partnered with NYU Law since 2009 to bring an iteration of its Law and Justice Institute to Washington Square. The summer program for rising ninth-graders from New York’s public schools occurs at five other local law schools. But while the version at NYU Law, dubbed Pathways to Achievement and Community Transformation (PACT), employs the same curriculum as the others, it is unique in that the students are all young men of color. (Two other schools host all-female groups; the remaining groups are coed.)

“The biggest benefit to both parties is a firm commitment to diversifying the legal field,” says Sanetta Ponton, Legal Outreach’s managing director of academic programs, of the partnership with NYU Law. Legal Outreach runs PACT, while the Law School provides space and other support.

This year, for the first time, PACT students were split into two groups to keep the student-to-teacher ratio low. Each class of 19 learned from two recent JD graduates (past instructors have included NYU Law alumni) as well as a college intern who taught study and testing skills. Those skills come in handy; PACT participants spend six to seven hours on the NYU Law campus every weekday and take a weekly exam. There’s also a strict dress code: a button-down shirt, slacks, and a tie. The rigorous five-week criminal law curriculum, peppered with guest speakers (who often include Law School alumni, in addition to Morrison) and field trips to a law firm and courts, culminates in a mock trial with a real-life judge.

“For the majority of our kids, this is the hardest they’ve ever had to work,” says Ponton, “which we are proud of, but it also says something about the schools they come from.” Apart from their developing skills and knowledge through exposure to the law, she adds, the all-male dynamic fosters brotherhood: “We want the young men to be in an environment where it’s OK for them to be academically gifted.”

“We’re constantly looking for innovative, effective ways of increasing the diversity of our student population and the practice in general,” says Hoyes. “We’re not just talking strictly racial diversity, which is of course extraordinarily important, but socioeconomic diversity as well.... NYU’s interest is to reach out to students who may one day join our Law School community, but also to help improve the world.”