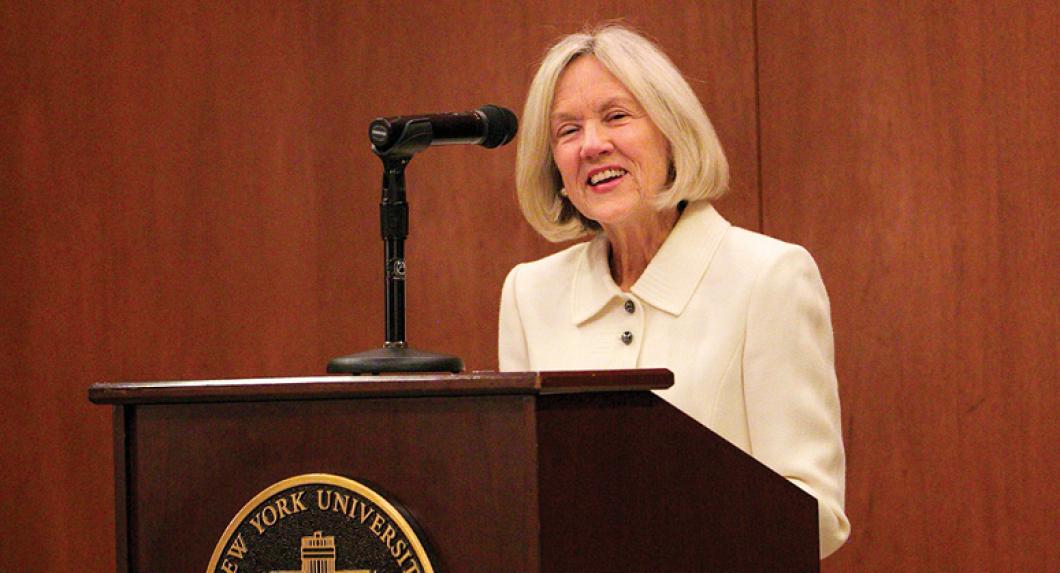 On March 24, Law Women honored Nancy Duff Campbell ’68, co-president of the National Women’s Law Center, as Alumna of the Year. In accepting the award, Campbell spoke about her work in three legal and cultural movements: civil rights, poverty and welfare, and women’s rights.

Campbell first became involved in the civil rights movement as a college student at Barnard College, then as a law student at NYU.  She particularly remembered one summer spent working in Mississippi, recalling, “on one very memorable occasion in 1965, briefing Dr. Martin Luther King on developments in Selma as we shared a plane ride from Montgomery to Atlanta.”

Following law school, Campbell worked at the Legal Services Support Center on Public Benefits Law, now the National Center for Economic Law and Justice. She graduated the same year that the US Supreme Court heard its first welfare case. King v. Smith challenged the so-called “man in the house” rule, which prevented women from receiving welfare benefits; then in 1970, Goldberg v. Kelly established a constitutional right to a hearing before welfare benefits could be terminated: “Our lawyers secured these victories, and we successfully pushed to expand their reach, working with legal services across the country.”

In the 1970s, Campbell, by then an active participant in the women’s rights movement, began to work with the organization that would become the National Women’s Law Center. “We and our allies in the women’s movement can now count among our victories outlawing discrimination on the basis of pregnancy in employment and education; improving the tax treatment of single heads of households; expanding federal childcare assistance; expanding athletic and other educational opportunities for women and girls; increasing child support enforcement; protecting and improving Social Security; securing a mandated package of benefits for women in the Affordable Care Act; and many, many more,” she said.

While expressing pride in these accomplishments, Campbell also emphasized the importance of the work still ahead. “The equality our country promises has not yet been realized,” Campbell cautioned. “The persistence of poverty, especially the poverty of families with children headed by a woman alone, reminds us that although we have won great battles, the war on poverty is far from over. The pay gap between women and men, the lack of affordable high-quality childcare, and the continued attacks on abortion and even contraception are just some of the things that remind us that women do not yet have equal rights.”

Campbell expressed optimism, however, that today’s students are well equipped to take on these challenges. “There is nothing more fulfilling than to have a cause and be committed to it,” she said. “Living with purpose, that’s my goal in my work and my life. That’s what I want people to remember me for, and that’s what I wish for all of you.”