In the annual Latinxs in the Law Lecture, Iván Espinoza-Madrigal ’05—executive director of the Lawyers' Committee for Civil Rights and Economic Justice—considered the challenges faced by attorneys advocating for people who do not fit neatly into one predetermined category. 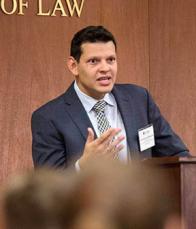 Espinoza-Madrigal worked at the Center for HIV Law and Policy, Lambda Legal, and the Mexican American Legal Defense and Educational Fund after graduating from the Law School as a Root-Tilden-Kern Sinsheimer Scholar. He has firsthand knowledge of underserved communities’ struggles. Growing up with his single mother and brother in a low-income immigrant community, Espinoza-Madrigal lacked health insurance until he started his first job out of college; many of his friends dropped out of high school and encountered the criminal justice system.

“These are just a few examples of life at the intersection of race, immigration, and poverty, and when I came out in college, I added sexual orientation to this mix,” he said. “Even today, every case I file reminds me about my family’s struggle.”

One such case was that of an immigrant mother who was forced to breastfeed in an unlocked storage closet accessible to co-workers. The client’s human resources department, unwilling to intervene, also told her to stop bringing “ethnic food” to work; management ultimately forced her to eat lunch apart from the other employees.

Espinoza-Madrigal pursued national origin, sex, pregnancy, and race discrimination claims on his client’s behalf, but not without criticism: “Some of my peers, when they found out about the case, told me that I should be keeping her story clean and simple by alleging only one type of discrimination.” He faced similar resistance in a case involving a transgender sex worker living with HIV.

But only by resisting the pressure to oversimplify civil rights litigation, he argued, could advocates maximize the potential for real change. “We should respect and take into account our clients’ full identities and lived experiences,” said Espinoza-Madrigal. “Would we be able to win if we keep these stories simple? Maybe. But I don’t think we would be able to push the law to have the dignity in our communities recognized and to recognize the fact that people out there in the world experience discrimination at the intersection of multiple identities and categories.”