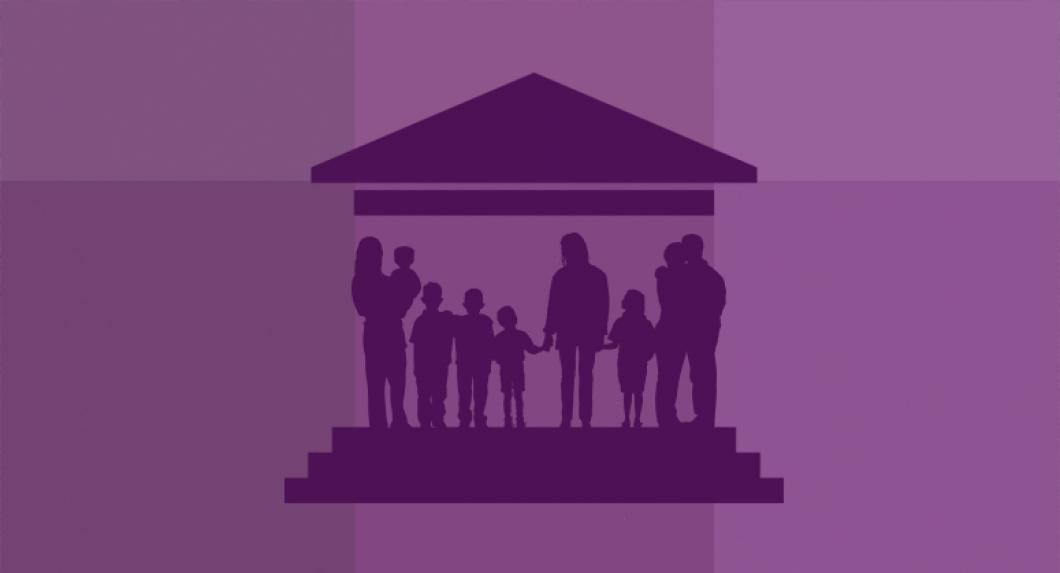 When Liberty Aldrich ’95 was just out of law school, representing parents in child protective proceedings as a fellow at Mobilization for Youth Legal Services (now called Mobilization for Justice), she discovered an oddity in the Manhattan Family Court: A sign on the wall pointing to an information office that no longer existed—if it ever had.

“I thought that was distressing, that there was this nonexistent service and that there was no one in fact to answer questions,” Aldrich says. The lack of assistance for petitioners was particularly problematic, she explains, because most litigants in Family Court do not have legal representation.

Aldrich and Karen Simmons, a then-colleague at MFY Legal Services, applied to the supervising judge of the Manhattan Family Court (Judge Judith Sheindlin of Judge Judy fame) for permission to set up an information table in the lobby. They soon joined forces with Leslie Abbey ’95, who had been Aldrich’s classmate in the Family Defense Clinic taught by Fiorello LaGuardia Professor of Clinical Law Martin Guggenheim ’71. The three set up a nonprofit for their information distribution efforts: Legal Information for Families Today (LIFT).

In the more than two decades since, LIFT has expanded to provide a range of services in addition to education and information sites located in the Family Courthouses in all five boroughs of New York City. LIFT now offers family legal centers, where LIFT staff attorneys give in-depth assistance to litigants; parenting workshops on issues including money management, healthy living, and communication; and 40 legal resource guides that provide simple explanations on family law topics such as custody, visitation child support, and abuse and neglect. In the past year, LIFT’s services reached nearly 30,000 Family Court litigants in New York City.

It’s no coincidence that two of the three founders of LIFT are alumnae of Guggenheim’s Family Defense Clinic. The clinic, which Guggenheim has taught for more than 25 years, pairs law students with Master of Social Work candidates from the NYU Silver School of Social Work to represent parents who are accused in child welfare cases of having neglected their children.

“One of the very best experiences I had at NYU was taking that clinic,” says Abbey. “Marty has been a very special person in my professional life—his career and his teachings have always been a source of real inspiration to me.” For Aldrich, the clinic was decisive in helping her choose family law as a career. “I knew I wanted to work in legal services, with people who could not afford an attorney,” she says. “It was Marty’s clinic that gave me a very clear idea that I wanted to work with underserved families.”

Abbey, who is now the chief operating officer at Covenant House New York, and Aldrich, managing director of the Center for Court Innovation, both remain on the board of LIFT, serving alongside Board Chair William Silverman ’92, pro bono partner at Proskauer Rose; and Karen Greenstein ’95, general counsel at Purch, a digital publishing and performance marketing platform.

Another NYU Law graduate, Cathy Cramer ’88, recently joined the organization as chief executive officer. An alumna of Vice Dean Randy Hertz’s Juvenile Rights Clinic, Cramer credits her clinical experiences with turning her on to both family law and juvenile justice. “Those classes have produced some of the most amazing public servants in New York City,” she says. “The clinical program is really responsible for the beginning and continuing evolution of this nonprofit.”

While Guggenheim won’t take full credit for inspiring the work of his former students—“it might be reasonable to say that I didn’t lessen their interest in the field,” he says—he underlines the significance of the work that they are doing for New Yorkers in Family Court.

“This is an enormously important court, and it is adjudicating among the most important matters in people’s lives, whether it’s their personal safety regarding domestic violence, their need for financial support in child support, or custody and the opportunity to keep your children,” he says. Because the majority of litigants are representing themselves, Guggenheim says, Family Court is often described as a “people’s court”—but in reality, it is often far from welcoming to the people it serves. LIFT helps close that gap, he says.

LIFT’s latest effort is the creation of an online video conferencing and document sharing program that allows pro se litigants to connect with and receive assistance from pro bono lawyers at law firms. Silverman, who has been the driving force behind this project, notes that the technology will allow LIFT to help litigants who, because of lack of transportation or the need for child care, might not be able to get to the courthouse to meet with a lawyer. “Years ago, our ambitions were greater than the available technology—now the technology has caught up,” he says.

With this new platform, Cramer says, LIFT will be able to reach people in Family Court throughout New York State. “We think this is going to be a game-changing service,” she says. “It will result in more efficiency, much less wait time, and most importantly, it will get even more pro bono attorneys to make an impact with litigants who truly need their help.”