Anniversaries coincided on Saturday evening as the gala dinner to celebrate the 20th anniversary of the Hauser Global Law School featured the 10th Annual Emil Noël Lecture. Koen Lenaerts, vice president of the Court of Justice of the European Union spoke on the State of the (European) Union, as a rights-based legal order. 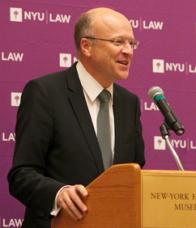 The impressive neoclassical interior of the New York Historical Society provided a perfect setting Lenaerts embarked on a tour d’horizon through the case law of the European Court of Justice going back to the seminal judgment in van Gend & Loos of 1963. He reiterated that “the raison d’etre of the EU is inherently linked to the protection of individual rights.” Repeatedly, he drew parallels between the legal orders on both sides of the Atlantic. Examples included the US Supreme Court’s landmark decision in Marbury v Madison of 1803, which laid the foundation for judicial review. Lenaerts justified a more recent application of this doctrine in the famous, yet controversial, Kadi decision of his court which guaranteed judicial review over EU regulations, which implemented sanctions that had been authorized by the Security Council of the United Nations. Turning to more recent events, Lenaerts compared the judgment of his court in Digital Rights Ireland earlier this year, which invalidated the EU data retention directive, with the US District Court for the District of Columbia’s ruling in Klayman v Obama, which criticized the bulk collection of phone and Internet metadata by the NSA as “almost Orwellian” and incompatible with the Fourth Amendment to the US Constitution. Lenaerts endorsed this judgment by calling it the “twin sister to Digital Rights Ireland.”

He went on to talk about the challenge of striking a balance between EU unity and national diversity, arguing for an “orderly pluralism” based on a “common constitutional core.” Lenaerts stressed the importance of his Court in this endeavour. Operating in 24 languages its aim remains to create added value for the common law of Europe.

The keynote was followed by a stimulating fireside chat between NYU Law alumna Rita Hauser and University Professor on Leave J.H.H. Weiler, president of the European University Institute in Florence and former director of the Hauser Global Law School Program, a program that would not have been possible without Rita and Gustave Hauser’s generous gift to the law school. Before leaving the stage to a standing ovation, Rita Hauser urged the present Hauser scholars to “go home and be leaders at home,” and reminded them that, “to do great things and good things, that’s what the Hauser program is all about.”