Kenneth Thompson ’92, Brooklyn’s first African American district attorney, passed away on October 9 at age 50 after a battle with cancer. 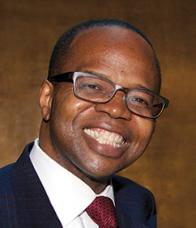 In a statement to the NYU Law community, Dean Trevor Morrison said, “Ken was a visionary leader, a trailblazing district attorney, and a courageous voice for reform of the criminal justice system.”

At the Law School, Thompson was active in the Black Allied Law Students Association and a protégé of then-Professor Ronald Noble, who had been a deputy assistant attorney general with the Department of Justice. Influenced by his professor’s career path, Thompson worked as his special assistant after Noble became assistant secretary of the US Treasury, responsible for overseeing the Bureau of Alcohol, Tobacco, and Firearms. Thompson was part of the team that investigated the 1993 federal raid on the Branch Davidian compound in Waco, Texas.

Thompson was subsequently an assistant US attorney for the Eastern District of New York, where his most high-profile win was the successful prosecution of Justin Volpe, one of the New York City police officers who beat and tortured Haitian immigrant Abner Louima. Thompson then spent 14 years in private practice, during which he handled a widely watched lawsuit against Macy’s for alleged racial profiling of suspected shoplifters as well as the civil suit of hotel maid Nafissatou Diallo against French politician Dominique Strauss-Kahn for an alleged sexual assault.

In November 2013, Thompson won the Brooklyn district attorney’s race against longtime incumbent Charles Hynes with 72 percent of the vote. Along with bolstering resources for preventing and investigating crimes, including a multipronged approach to combating gun violence and the establishment of a dedicated forensic science unit, Thompson sought to eliminate practices that undermined both law enforcement and community relations with police. After Thompson informed the New York City Police Department that his office would largely cease prosecutions of low-level marijuana possession, the NYPD adopted his approach. Perhaps most significant, Thompson launched the Conviction Review Unit to investigate suspected wrongful convictions.

“I’m not interested in freeing murderers into the community,” said Thompson in a 2015 NYU Law Magazine profile, “but we cannot allow innocent men, or men who were wrongfully convicted, to be in prisons for murders and other crimes that they did not commit.”

Rafiq Kalam Id-Din II, president of NYU Law’s Law Alumni of Color Association (LACA), said in a statement to LACA members that “Ken represented the very best of us, the epitome of a social justice warrior in every way.”

Thompson is survived by his wife, Lu-Shawn, and his two children, Kenneth and Kennedy.