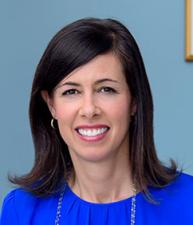 On December 7, the US Senate confirmed Jessica Rosenworcel ’97 as chair of the Federal Communications Commission (FCC), the first woman to hold that position.

Rosenworcel served two terms as a FCC commissioner before President Joe Biden named her acting chairwoman in January 2021. She was the second woman to serve as an acting FCC chair.

“It is a tremendous honor to be confirmed and designated as the first permanent Chairwoman of the Federal Communications Commission,” Rosenworcel said in a statement. She added: “People across the country count on the FCC to support the connections they need for work, learning, healthcare, and access to the information we require to make decisions about our lives, our communities, and our country. I look forward to working with the Administration, my colleagues on the Commission and FCC staff, members of Congress, and the public to make the promise of modern communications a reality for everyone, everywhere.”

Rosenworcel began working at the Wireline Competition Bureau of the FCC in 1999 after a stint in communications policy at a Washington, D.C. law firm. She later worked as senior communications counsel to the US Senate Committee on Commerce, Science, and Transportation. President Barack Obama nominated Rosenworcel to her first term as FCC commissioner in 2011.