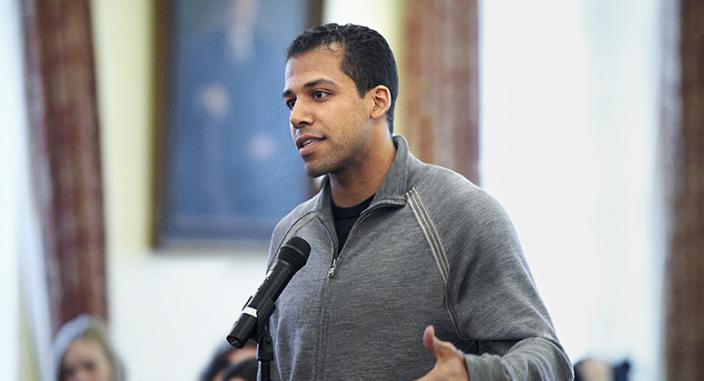 Five years after graduating from law school, Jeramie Scott ’12 serves as national security counsel at the Electronic Privacy Information Center (EPIC) and works on some of today’s most pressing privacy issues. He has helped EPIC file high-profile amicus briefs in the US Supreme Court on issues concerning government surveillance. This has included an amicus brief in Clapper v. Amnesty International USA, a case concerning whether public interest organizations, journalists, and lawyers could challenge the constitutionality of the FISA Amendments Act of 2008, which gave the government broad authority to intercept and collect communications involving US persons. Earlier this year, Scott also published a research paper that examines how the US government uses private sector social media monitoring companies in the surveillance of private citizens, including groups such as Black Lives Matter protesters.

Scott’s work is a result of his long-held fascination with issues of information privacy, and when he first entered law school, he already knew that he wanted to pursue a career in privacy law. Scott recalls that, as an undergraduate in the early 2000s, he became interested in the implications for privacy rights as he learned of technology companies collecting information on users. “This struck me as something that would need to be addressed, given what I felt was the importance of privacy in the context of a functioning democracy. It has become an even bigger issue since I went to law school,” Scott says. “And when I was applying, I saw real opportunities to explore the area at NYU Law.”

Scott’s experiences as an NYU Law student prepared him well, he says, for his current role: In addition to serving as EPIC’s national security counsel, Scott is also the director of EPIC’s Domestic Surveillance Project. He focuses in particular on privacy issues created by surveillance programs that employ drones, biometrics, big data, and license plate readers. He has worked on issues surrounding the FBI’s biometric database, called Next Generation Identification (NGI), helping to provide the public with information about how it works through Freedom of Information Act (FOIA) lawsuits.

“We revealed to the public that the FBI was willing to accept a 20 percent error rate for their facial recognition technology and exposed the continued disregard for the privacy risks associated with facial recognition,” Scott says. “We also wrote extensive comments last year when the FBI decided they were going to exempt the NGI database from the protections of the Privacy Act, and urged Congress to take a closer look at both the biometric database and the use of facial recognition in particular.”

Scott cites privacy law courses taught by Alfred B. Engelberg Professor of Law Katherine Strandburg and Senior Fellow Ira Rubinstein (for whom he worked as a research assistant) as being particularly helpful in preparing him for his chosen career path. Strandburg introduced him to the Information Law Institute’s Privacy Research Group, a weekly meeting of students, professors, and industry professionals to discuss privacy in the digital age. Scott also acknowledges that a national security course taught by Professor Samuel Rascoff has been especially relevant to his work on government surveillance issues. That class was significant in terms of looking at information that arose from Edward Snowden’s leak, Scott says, explaining that Rascoff’s course provided the basis for his understanding of the how the Patriot Act enabled the National Security Agency’s surveillance programs.

For current students interested in this area of law, Scott advises that it is crucial to seek out the Law School’s many resources, including the Center for Cybersecurity as well as the Brennan Center for Justice and Information Law Institute. “It was very informative to me to be able to interact with people who work on different areas of privacy—not necessarily just law students and law professors—to get a good breadth of the privacy realm,” Scott says.

Because much of Scott’s work also relates to the Administrative Procedure Act, which governs how administrative agencies can establish regulations, he explains that Administrative Law, the required course in which he first learned about the act, was significant. He is currently working on EPIC’s lawsuit against the Federal Aviation Administration for what he sees as the agency’s failure to address privacy in the context of their work to integrate drones into the national airspace.

As technology is constantly evolving, Scott says, privacy law will only continue to grow and change. As he looks forward in his career, he hopes to be able to continue his work to protect the privacy of citizens and hold the government accountable for its actions. “It goes hand in hand,” Scott says, “that the public should be able to enjoy maximum privacy, while the government should be as transparent as possible.”

“The Center for Cyber Security creates a dialogue between engineers and lawyers”
NYU Law website, 3/17/16