The March 2 installment of the Center for Diversity, Inclusion, and Belonging Speaker Series featured Iris Bohnet, professor of public policy at Harvard University’s John F. Kennedy School of Government and author of the book What Works: Gender Equality by Design. Bohnet discussed examples of gender bias, asserting that the implications go far beyond conversations about women’s career advancement: “There are people in the world for whom the lack of economic opportunities really is a matter of life and death.” 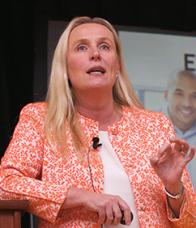 She pointed to a study in which young women from 200 villages in India were hired to work in call centers. The increased economic opportunities for these women, Bohnet said, positively affected how parents treated their daughters and increased the latter’s chances of survival: “Returns on investment matter even for the poorest of the poor.”

On the other end of the economic spectrum was the example of Silicon Valley venture capitalist Heidi Roizen. When Frank Flynn, former professor at Columbia Business School, distributed a Harvard University case study about Roizen to his students and, with Harvard’s permission, retained her name in some versions and substituted “Howard” for “Heidi” in others, both male and female students rated Heidi as less likeable than Howard.

An effective way to address that kind of unconscious bias, Bohnet explained, is to change the environment around it. One such method dates back to the 1970s, she said, when major orchestras began placing auditioners behind screens to make tryouts appearance-blind. As a result, the proportion of women in large orchestras eventually increased from 5 percent to more than 40 percent. “That is a little bit of design making it much easier for us to actually see talent where it is,” said Bohnet.

That kind of practical logistics has been more effective, she said, than diversity training; Bohnet has not found a study proving conclusively that such training works. “Our minds are pretty stubborn beasts. I’m not saying that our minds can never change… but I am suggesting to you that it’s hard to change mindsets.”

What has worked better, she added, are attempts to help traditionally disadvantaged groups navigate the current system more effectively through leadership and negotiation training and mentorship. Other methods include de-biasing the gendered language used in job listings, letters of recommendation, and performance appraisals, and rethinking college entrance exams. Until recently, the SAT awarded one point for a correct answer and deducted one-fourth point for each incorrect answer, thus advantaging guessing. Research found that this system adversely affected the scores of young women but not young men, and as a result, the SAT changed its grading scheme.

Bohnet also pointed to indications that “exposure to counter-stereotypical individuals in fact can change what we think is possible for ourselves, but it takes time.” An amendment to the Indian constitution in 1993 stipulated that one-third of all villages must have a female mayor. One study showed that, in villages that have had at least two female leaders in the amendment’s wake, “mindsets are starting to change. People are starting to believe that political leadership is also for women. It affects both stereotypes of men and women, of what a political leader looks like, but also what parents thought was possible for their daughters.”

In exploring potential methods to rectify gender biases, Bohnet stressed the importance of exposure to diverse role models and methods. “We get better at making our judgments—any judgments—the more we see the world in comparative perspective.”