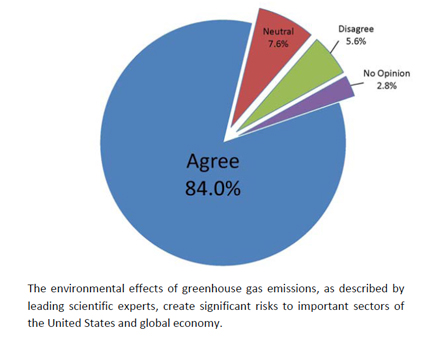 A new survey by the NYU School of Law's Institute for Policy Integrity, a nonprofit think tank advocating better governmental decision-making in environmental law and other areas, found strong agreement among top economic experts about the threat climate change poses to the U.S. and global economies, with 84 percent saying that the effects of greenhouse gas emissions jeopardize important national and global economic sectors.

Sent to roughly 300 authors of climate change-related articles published in the past 15 years in the top 25 economics journals, with fully half of the audience responding, the survey revealed solid consensus on a number of its dozen questions. In a show of near-unanimity, 97.9 percent of respondents thought pricing carbon emissions through a tax or cap-and-trade system would increase incentives for energy efficiency and the development of energy production emitting less carbon, with 91.6 percent preferring to reduce greenhouse gases through such market-based mechanisms rather than through command-and-control regulation. More than 80 percent of the economists favored auctioning carbon allowances rather than freely distributing them. Greater than half thought the U.S. should commit to reducing its greenhouse gas emissions regardless of what other countries do in that area, and more than 90 percent expected that most of the environmental and economic repercussions of those emissions would be experienced by future generations. The economists also put a price on the global "social cost" per metric ton of carbon; while the range of responses was wide, the median figure was $50.

"Changes to Daily Life Under Cap and Trade Will be Gradual, Experts Say" HeatingOil.com, 12/2/09