In the seventh annual Friedrich A. von Hayek Lecture, “The Hayekian Judge,” Robert Smith, an associate judge on the New York State Court of Appeals, discussed how the ideas of Hayek, a classical-liberal economist and philosopher, might influence a judge’s decision-making. Richard Epstein, Laurence A. Tisch Professor of Law, introduced the lecture.

Acknowledging that he had long self-identified as a Hayekian without having read much of Hayek’s work, Smith said he had recently delved into the Hayekian oeuvre. Reviewing the literature confirmed for him, he said, that “I am a Hayekian. I dislike intensely anything that strikes me as unnecessary coercion, whether it’s a tax or an exclusionary zoning regulation or a minimum wage law. I react very much against any governmental intrusion that seems to me beyond the minimum that’s necessary for an ordered society. I’m not only a Hayekian but also a judge, so what does a Hayekian judge do?” 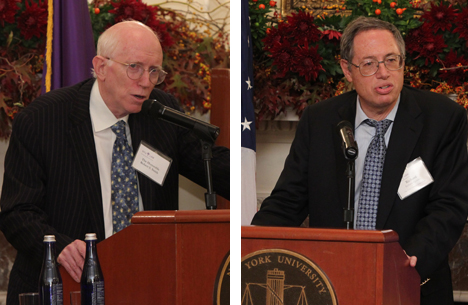 He quoted what he deemed to be Hayek’s answer, in the context of the rule of law: “The conception of freedom under the law...rests on the contention that when we obey laws, in the sense of general abstract rules laid down irrespective of their application to us, we are not subject to another man’s will and are therefore free. It is because the lawgiver does not know the particular cases to which his rules apply, and it is because the judge who applies them has no choice in drawing the conclusions that follow from the existing body of rules and the particular facts of the case, that it can be said that laws and not men rule.”

So the Hayekian judge, Smith suggested, “has no choice. A Hayekian judge is an automaton. The Hayekian judge has nothing to do but to open up the rulebook and find some rules, rules that are laid down irrespective of their application to particular cases, rules that were written by someone who is not the judge, and just do what it says there. Seems like a very boring job.”

But, Smith continued, there was a wrinkle. “There are a great many cases in which it’s not at all hard for the judge to manipulate the facts and the law to get the results that he or she wants. And even when it is hard, judges manage to do it anyway, with very consistent success.... The practice of beginning with the result and manipulating the law and the facts in order to get there is very common. In fact, the truth of the matter is all judges do it. Everybody does it. I do it myself. It’s human nature, it’s inevitable, it is original sin.”

Nevertheless, Smith said, “it’s not what we’re supposed to be doing.... It is obviously the antithesis of the rule of law that Hayek talked about.  If a judge can get any result he wants and has only to rationalize it, then we do not have a government of laws and not men. We have a government of men and women who happen to be judges, and the judge who proceeds in that way is a decidedly non-Hayekian judge.”

What, then, is the right path for a judge of Hayekian persuasion? “When I’m acting legitimately, am I really an automaton?” said Smith. “Do I really have no choice about the decisions I make and simply look things up in the rulebook? Is my job really all that purely mechanical and boring?”

No, he answered. “There is something in the world of judging called discretion. There are problems to which there are two possible answers, and neither one of them is really inconsistent with the rule.... I’m not going to tell you that there’s a Hayekian way to decide the best interest of a child...but you might be able to predict, for example, that a Hayekian judge will be somewhat more sympathetic to a claimant for custody who might have violated a rule or two here and there, especially if the judge thinks it’s a dumb rule, and perhaps even that the Hayekian judge would be willing to pay a bit more attention than others to what the child wants.”

The concepts of discretion and common law gave Hayek “fits,” Smith said. “You can see that there’s an obvious impulse for someone who believes in the rule of law to eliminate all discretion and try to have everything done by predictable rules, but I think he knew you can’t do that, and it might not work out so well to try.... It’s not just that you can’t answer all the questions that way, but that you don’t want to.... Even if it were possible, it doesn’t sound like freedom to me. It sounds like the opposite.”

In the end, Smith said, a true Hayekian judge must put duty to the law before personal philosophy: “If you let yourself as a judge believe that the Constitution prohibits everything you don’t like, then you’ve really put yourself in the very non-Hayekian position of being not a judge with no choice, but a judge with absolutely unfettered choice. That, to me, is not legitimate, and it is not a Hayekian approach. What does the Hayekian judge do when he finds that the rules he’s required to apply are antithetical to liberty? I have a very simple answer. Tough luck. He applies the rule anyway. When push comes to shove, the rule of law wins. If the rulebook is insufficiently Hayekian, you have to get more Hayekians elected to the legislature and change the rule. You are not free simply to legislate.”