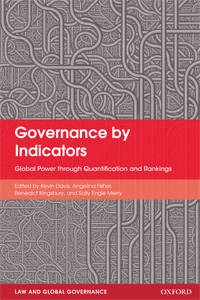 In growing numbers, national and transnational government agencies, NGOs, and private consultancies are producing rankings of everything from corporate governance to health care and human trafficking to “state fragility” – and increasingly, these rankings are playing a crucial role in global allocation of funds and resources. Examples include the Political Risk Index, produced by a private consultancy to guide investors on where to invest and immunization-coverage assessments prepared by the World Health Organization that help determine a country’s eligibility for of vaccination program funding.

But what are the implications of our increasing reliance on such rankings to guide policy and investment? What pitfalls do they present? What kind of oversight ought they be subject to? How should governments use or challenge global ratings and rankings? These are among the issues being examined by NYU Law’s Institute for International Law & Justice (IILJ) through its Indicators as a Global Technology/Governance by Information Project. (“Indicator” is essentially synonymous with ranking.) The IILJ has just published a book, Governance by Indicators: Global Power through Quantification and Rankings, that was edited (and in good part written) by four NYU Law-affiliated scholars: Kevin Davis, vice dean and Beller Family Professor of Business Law; Angelina Fisher (LL.M. ’04), adjunct professor and IILJ program director; Benedict Kingsbury, Murry and Ida Becker Professor of Law and IILJ faculty director; and Sally Engle Merry, professor of anthropology and law and society.

The IILJ project on indicators in global governance has already generated a significant number of conferences, workshops and publications, and has engaged scholars from around the world. In June Davis and his NYU collaborators organized three panels around the topic at the annual meeting of the Law and Society Association in Honolulu, and a group of Italian scholars organized another conference on the subject in Rome. Scholars will continue the discussion in December at the National University of Singapore. “I have found the project extremely rewarding,” says Davis, “because it focuses on a set of very practical issues – virtually every policymaker we meet with uses indicators but has misgivings about them – and analyzes them through an interdisciplinary lens and from a global vantage point, incorporating contributions from scholars around the world.”

Even beyond its four editors, Governance by Indicators is, as Kingsbury notes, “very much an NYU Law project.” Professor of Clinical Law Margaret Satterthwaite contributed two chapters, and it includes chapters written by Global Visiting Professor of Law Sabino Cassese (who is also a judge on the Constitutional Court of Italy); Nehal Bhuta (LL.M. ’05, a professor at the European Institute in Florence); former IILJ research scholar Nikhil Dutta (currently clerking for Chief Judge Sandra Lynch on the U.S. Court of Appeals for the First Circuit; and former IILJ fellows Lorenzo Casini (a professor at Sapienza – Università di Roma), Sarah Dadush (counsel at the International Fund for Agricultural Development in Rome), and René Urueña (a professor at Universidad de Los Andes in Bogota).

Funded by grants from the Carnegie Corporation, the Rockefeller Foundation, and the National Science Foundation, Governance by Indicators is the first volume in a new Law and Global Governance series of Oxford University Press, edited by Kingsbury; Richard Stewart, University Professor and John Edward Sexton Professor of Law; and Professor Andrew Hurrell of Oxford.