This year’s annual Emilio Mignone Lecture on Transitional Justice, which was jointly sponsored by the Center for Human Rights and Global Justice and the International Center for Transitional Justice, focused on the need to further explore the links between justice and development in the context of the historic changes sweeping the Arab world. Helen Clark, head of the United Nations Development Program (UNDP), joined Hossam Bahgat, chairman of the Egyptian Initiative for Personal Rights and a prominent leader of the popular revolution in Egypt, to discuss “Justice and Development: Nexus at the Heart of Arab Spring.” 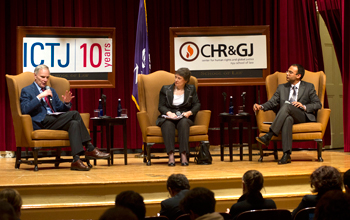 Clark, who also served as Prime Minister of New Zealand for three terms from 1999-2008, described the UNDP’s mission in relation to the idea of transitional justice. “Fundamentally, I think transitional justice and human development are about building societies which can be at peace, can be just, can be inclusive,” she said. “The challenge we share is to see that transitional justice and development practice do actually contribute to ongoing transformations which bring sustained and meaningful improvement to peoples’ lives. At UNDP we encapsulate our mandate in a phrase: ‘Empowered Lives and Resilient Nations.’ We see empowerment and resilience as at the very heart of development.”

Following Clark, Bahgat discussed the relationship between the ideas of development and transitional justice with his experiences in the Egyptian Revolution. “That never-again element, the moral outrage at violations of practices in the past that we see in transitional justice, would be helpful if it’s applied also more broadly to the area of development, to the area of social justice,” he said. “Because again, despite what we might see in history books in the future, this was a revolution for social justice and for basic civil liberties.”

After Clark and Baghat spoke, Philip Alston, John Norton Pomeroy Professor of Law, led both speakers in a discussion, followed by a Q&A session with the audience.