In a major speech at NYU Law on September 10, Deputy Attorney General Sally Quillian Yates outlined the reasoning behind the Department of Justice’s new policy on individual liability in instances of corporate wrongdoing. 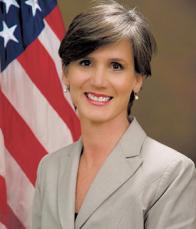 The policy, which addresses calls for the Justice Department to pursue more prosecutions of corporate leaders whose malfeasance contributed heavily to the 2008 financial crisis, garnered a front-page New York Times story on the morning of Yates’s speech. The audience for the speech, hosted by the Law School’s Program on Corporate Compliance and Enforcement, included a number of US attorneys from around the country and other high-ranking Justice Department officials.

Yates, a former US attorney for the Northern District of Georgia who began working as the Justice Department’s second-in-command in January, has extensive experience in white-collar prosecution, having served as chief of the Fraud and Public Corruption Section before becoming head of the US Attorney’s Office in Atlanta. “Crime is crime,” she said in her remarks. “And it is our obligation at the Justice Department to ensure that we are holding lawbreakers accountable regardless of whether they commit their crimes on the street corner or in the boardroom.”

While the DOJ has made headlines in the recent past for its criminal prosecutions of large corporations, individual culprits within companies have largely avoided punishment. Yates acknowledged the difficulty of bringing specific executives to justice in organizations “where responsibility is often diffuse,” pointing out that proving knowledge or criminal intent beyond a reasonable doubt can be a tall order without an inside cooperating witness identified early in the process of an investigation. The increasing globalization of corporations and the attendant restrictive privacy laws overseas, she added, present further complications.

Nevertheless, Yates said, “The public expects and demands this accountability. Americans should never believe, even incorrectly, that one’s criminal activity will go unpunished simply because it was committed on behalf of a corporation.”

In recent months, a Justice Department working group has reexamined the approach to corporate investigations, culminating in Yates’s policy memo, whose six points she fleshed out for the audience.

The first point, effective immediately, does away with partial cooperation credit for corporations who fail to provide all relevant information about individual employees implicated in misconduct. While the new guideline represents a change in the former approach to corporate prosecutions, Yates argued that it merely aligns with the way other kinds of criminal investigations are already conducted. She spoke of a hypothetical drug trafficker: “If he has information about the cartel boss and declines to share it, we rip up his cooperation agreement and he serves his full sentence. The same is true here. A corporation should get no special treatment as a cooperator simply because the crimes took place behind a desk.”

The other new guidelines include a focus on individual wrongdoers from the outset of both criminal and civil corporate investigations, routine communication between criminal and civil attorneys in such investigations, an end to corporate resolutions that protect individuals from liability except in extraordinary circumstances, a clear plan to resolve related individual cases before the conclusion of the overarching corporate case, and evaluations by civil attorneys of whether to prosecute individuals that are not limited by the person’s ability to pay.

Yates acknowledged that the revised guidelines would not necessarily make an already complicated type of prosecution easier. “The Department makes these changes recognizing the challenges they may present,” she said. “But we are making these changes because we believe they will maximize our ability to deter misconduct and to hold those who engage in it accountable.”

Watch the full video of the speech (28 min):