As an avid reader of fiction, Wayne Perry Professor of Taxation Dan Shaviro has eagerly devoured literary classics such as Pride and Prejudice and A Christmas Carol. As an expert in tax policy, Shaviro probes beyond Elizabeth Bennet’s romance with Mr. Darcy and Scrooge’s change of heart to explore the insights these books offer into societal status and inequality.

In Shaviro’s new book, Literature and Inequality: Nine Perspectives from the Napoleonic Era Through the First Gilded Age, he analyzes novels whose authors provided perspective on societal status and wealth during their eras, and he connects those stories to modern plutocracy. On October 15, he discussed his book with Chief Justice Earl Warren Professor of Constitutional Law Kenji Yoshino, and Branco Milanovic, a senior scholar at the Stone Center on Socio-economic Inequality, in an NYU Law virtual event.

“One could and should ask, what exactly are we getting from looking at economic inequality through literature that we could not glean from other modalities or disciplines?” said Yoshino. He noted that no economic model could have a more nuanced vision of human beings than what is expressed in these works. “This is important because it is this complexity that allows these characters to endure and survive and speak to us today,” he said.

In separate presentations, the three speakers discussed different aspects of Shaviro’s book and its focus on what Shaviro calls “high-end inequality”—the argument that a high concentration of wealth among a small population within a society creates negative effects for society as a whole. 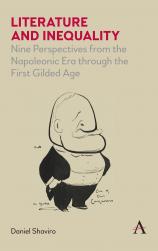 Through the novels he analyzes, Shaviro explores the transition of England and France from aristocratic to capitalistic societies and the rise of businessmen and financiers during the Industrial Revolution, as well as the social consequences of the American dream. “If we think everyone has chance to succeed, and the people who succeed are the winners, and the ones who fail are the losers, that creates a lot of stress, and a lot of anger, and a lot of tension—a lot of dignitary wars as well as practical wars,” Shaviro said. “And so, I did think of this as having something to do with where we are today, and why our society seems to have gone so wrong.”

Yoshino discussed several of the novels in the context of wealth, power, and what money can and cannot buy in a world where “there seems to be no end to how much money one can possess.” He noted that, in addition to seeing Elizabeth Bennet as an avatar of Jane Austen, Shaviro also believes that Dickens saw much of himself in Scrooge. “[Shaviro] quotes the novelist Jane Smiley, ‘Ebenezer Scrooge was Charles Dickens, a man for whom money itself offered no prospect of safety, a man for whom isolation from the obligation of human relationships might be a form of peace,’” Yoshino said.

The event concluded with a question and answer period during which Shaviro provided closing thoughts on the increased importance attached to income when class systems are destabilized, contemporary narratives around wealth and inequality, and how he selected the novels he chose.