Although plenty of students are inspired by Professor Adam Cox’s course, Legislation and the Regulatory State, not all of them write songs about it. But last year, as Lewie Briggs ’15 studied for his final in the course, he was struck by musical inspiration while reviewing the two-step analysis born from the Supreme Court’s 1984 decision in Chevron USA v. Natural Resources Defense Council. “People talk about the Chevron Two Step, and it kind of sounds like a dance,” says Briggs. He went with the idea, and came up with a rap song about the Chevron two-step analysis, which, he notes, was actually useful in prepping for the Legislation and the Regulatory State exam. 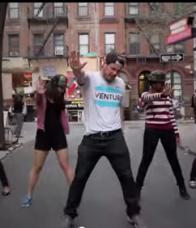 This spring, when finals came round again, Briggs decided to take the next step and recruited Jesse Dong ’15 to film a music video of the song. The video starts out in a law classroom, where, shortly after the start of an exam, Briggs jumps up on the desk and begins rapping and dancing to the Chevron Two Step. Other students join in, and soon they are dancing in the courtyard of Vanderbilt Hall, in Washington Square Park, and on the streets of Greenwich Village. Once they posted their video on online, the Chevron Two Step went viral: as of today, the YouTube video has more than 15,000 views.

Briggs and Dong have received positive responses to the video from the NYU Law faculty—they report that both Professor Adam Cox and Segal Family Professor of Regulatory Law and Policy Rachel Barkow have requested to show the video to future 1L classes. Roderick Hills, William T. Comfort, III Professor of Law, recommended the rap-and-dance number on Prawfsblog. “My only cavil: Chevron probably has only one step, because Step #2 is likely reducible to State Farm 'arbitrary & capricious' review, and nothing more,” Hills wrote. “But a one-step dance (and maybe a one-step judicial doctrine) is perhaps a physical impossibility?”

The dance number has also found acclaim in the larger legal community. Above the Law, in an uncharacteristically snark-free post, called the song “entirely clever.” University of Michigan Law Professor Nicholas Bagley ’05 wrote on Twitter: “If you’re an administrative law geek, you’ll love this dance from NYU Law students.”

While Briggs and Dong are thrilled with the response their video has found on campus and beyond, they are particularly pleased that they were able to bring students from across the Law School community together in the production of the video. “A lot of people were meeting for the first time,” says Briggs, noting that the project drew 1Ls, 2Ls, and 3Ls from all different student organizations. For those who are still interested in learning the song and dance, Briggs also posted his instructional video on YouTube. As for why they chose to spend their time producing this video? “We care a lot about the 1Ls, and are just trying to make school more fun,” says Briggs.

Of course, this is not the first video from NYU Law students to make the rounds in the legal community. The NYU Law Revue recently won Above the Law’s annual Law Revue video contest with a number called “3L,” set to the tune of “Belle,” the opening song from Disney’s Beauty and the Beast. In addition to their contest-winning song, the Law Revue also produced a video, “Bluebooker,” set to Kanye West’s “Gold Digger.”

View the Facebook photo gallery of the 2014 NYU Law Revue