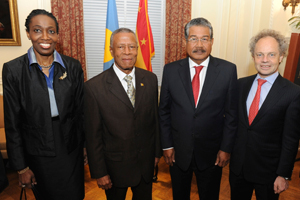 On February 2, Dean Richard Revesz welcomed President Johnson Toribiong of Palau and Prime Minister Tillman Thomas of Grenada for an event about climate change. Palau and Grenada, along with a number of small island countries, concerned about the impact of rising sea levels that are resulting from climate change, are going to introduce a resolution into the United Nations General Assembly asking for an advisory opinion from the International Court of Justice.

"The truth is that nothing we or other Pacific countries do will stem the rising tides or the flood of global emissions," said President Toribiong."We need everyone to buy in or it won’t work. An ICJ advisory opinion would give us the guidance we need on what all States must do. I am pleased that deliberations on a possible resolution have begun here in New York. But there is a long way to go."

The resolution is expected to be introduced later in the spring and requires a simple majority of the 195 U.N. GA members to pass. Attending the reception along with the President and Prime Minister were their ambassadors to the U.N., Stuart Beck (of Palau) and Dessima Williams (of Grenada). They were joined by nearly 100 other U.N. ambassadors, deputy permanent representatives and legal advisors.

Two NYU Law students and IILJ scholars, Julian Arato (J.D. '11, LL.M. '12) and Ben Heath (J.D. '11, LL.M. '12) have been assisting the Mission of Palau by providing legal advice on the issue. Since the Mission of Palau was opened in 2004, NYU Law students have provided legal assistance on a number of issues, including international environmental law and law of the sea.

The event was organized by the Frank J. Guarini Center for Environmental and Land Use Law and the Institute for International Law and Justice, with financial support from the Mission of Palau and the Mission of Grenada.