Post-9/11 counterterrorism was the topic of a January 23 panel discussion sponsored by NYU Law’s Center for Human Rights and Global Justice. Moderated by MSNBC host Chris Hayes, “Human Rights in the National Security Policies of the New Obama Administration: Prioritization, Co-Option, or Irrelevance?” featured Anne-Marie Slaughter, a professor of politics and international affairs at Princeton University who served as director of policy planning in the U.S. State Department; Elisa Massimino, president and CEO of the human rights advocacy organization Human Rights First; and Vincent Warren, executive director of the Center for Constitutional Rights and a former national senior staff attorney at the American Civil Liberties Union. 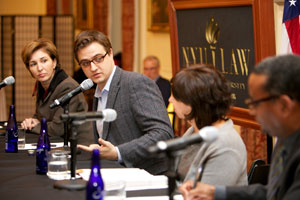 The implicit aim of the discussion was to respond to, as Hayes phrased it, a “lack of broad public outrage, interest, commitment to, stake in” issues involving national security and potential violations of human rights. Soon after conversation began, panelists turned to pressing counterterrorism matters. Slaughter decried Barack Obama’s decision to abandon the attempt to close Guantánamo. In terms of saving political capital for other human rights battles like health care, she said, it was a positive decision. But, she added, “One way to define human rights, and the reason that we have Human Rights First and the Center for Constitutional Rights, is to stand for those rights that people don’t want to stand for. It’s much easier to find people who want health care than people who will stand up for the people who are held in Guantánamo. The tradition of human rights as we talk about it is that we have people who are willing to stand up for the unpopular rights. It troubles me that he made that decision.”

The experts also delved into the hot-button topic of drones, which, said Hayes, have shown themselves to be popular with the American public in recent polling, along with the Guantánamo prison, which polls higher now than when Obama replaced George W. Bush: “In some ways, some of the worst human rights violations have been laundered by a Democratic presidency for Democrats, who genuinely and generally take their cues about what is proper and right from the leadership of their party.”

Warren unequivocally denounced the use of drones. “Both outside and within a human rights framework, looking to solve U.S. problems through targeted killing is nothing but bad,” violating, he said, both international and domestic constitutional law and killing a high number of bystanders in the process. Massimino’s take was more complicated: “In wartime when you have a combatant at war with the United States who satisfies the criteria under the laws of war to be targeted with lethal force, targeted killing is much preferable and keeps U.S. troops out of harm’s way more than the alternative.” Her chief problem, she said, was the administration’s legal framework, based on the idea of continuously being at war: “In the absence of the administration laying out what its rules are, we have killings and a lot of documented evidence of civilian deaths and these assertions that we can drop bombs on Somalia, and we have this flexible concept of imminence. That’s the rulebook that we’re handing to China, to Russia.”

Slaughter echoed Massimino’s point about the legal issues involved, and likened remotely controlled drone strikes to a “lethal video game.” She offered a vivid hypothetical: “The people we are killing become absolute caricatures. Just imagine that Mexico decides that the only way to fight the cartels is with drones. So Mexico is now going to take out anybody it wants on its side of the border. And you know what? Those people flee to Texas, so Mexico’s going to take out people on the border towns in Texas. The American people would be hysterical. Can you imagine death from the skies in Laredo? That’s what’s happening, but we see kill list, we see playing cards, we see turbaned al Qaeda heads, and we have no sense of the real toll of war.”