Professor Bryan Stevenson has been named a recipient of both the National Civil Rights Museum’s Freedom Award and the American Bar Association's Thurgood Marshall Award. 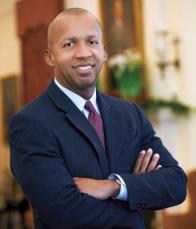 Stevenson, a death penalty defense lawyer since 1985 and co-teacher of the Equal Justice and Defender Clinic at NYU Law, has dedicated his career to social justice and human rights causes as executive director of the Equal Justice Initiative (EJI), a role he assumed in 1989. Stevenson’s work with EJI has resulted in awards such as the 1995 MacArthur Fellowship Award Prize and the 1991 ACLU National Medal of Liberty.

Stevenson channeled his experience as a litigator into the New York Times bestselling book Just Mercy, which garnered awards such as the 2015 Carnegie Medal for Best Non-Fiction, the Dayton Literary Peace Prize, and the NAACP Image Award for Best Non-Fiction.

Stevenson is one of five to receive this year’s National Civil Rights Museum’s Freedom Award. The other award recipients are journalist Soledad O’Brien, attorney Benjamin Crump, Judge Damon Jerome Keith of the US Court of Appeals for the Sixth Circuit, and human rights activist and 2011 Nobel Peace Prize winner Tawakkol Karman. They will be honored at the museum in a ceremony on October 20.

The American Bar Association presented the Thurgood Marshall Award to Stevenson during its 2016 Annual Meeting in San Francisco on August 6. The award, which honors US Supreme Court Justice Thurgood Marshall, recognizes dedication to “the advancement of civil rights, civil liberties, and human rights in the United States.”

The 2007 NYU Law Magazine cover story, “Bryan Stevenson’s Death-Defying Acts,” detailed the life experiences that led to his ultimate career path; how his professorship at NYU Law advances his work with EJI; and the story of his client Walter McMillian, the subject of Just Mercy.

"Equal Justice Initiative founder on race, police and how to move forward"
CBS This Morning, 7/11/16