Kalief Browder was held on Rikers Island without a conviction for three years and committed suicide in 2015. Jerome Murdough died in a hot cell a week after his arrival in 2014. Both prisoners found themselves on Rikers for the same reason: Neither could afford bail. 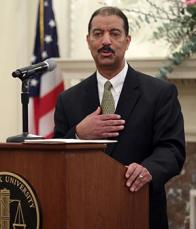 At the Institute for Judicial Administration’s 22nd annual Brennan Lecture on State Courts and Social Justice, Chief Judge Eric T. Washington of the District of Columbia Court of Appeals noted these cases as he focused on the plight of individuals who cannot post bail. Such defendants are likelier to be found guilty, be incarcerated, receive a longer sentence, and even plead guilty simply to go home. “Today, those individuals are disproportionately people of color who have been arrested for nonviolent and/or quality-of-life crimes and are primarily low-level, low-risk individuals,” Washington said. Beyond race, the common factor is that they are all “too poor to pay a money bond.”

Yet according to Washington, the 21st-century call for bail reform isn’t novel. He recalled two separate bail reform movements from the last half-century, which led to the Bail Reform Acts of 1966 and 1984. These acts allowed federal judges to consider the defendant’s background, community ties, and risk of violence when assigning bail, but those measures failed to fix a system that continued to disadvantage the poor.

Originally among the districts criticized for misusing money bonds, DC reformed its pretrial practices in the 1990s, emphasizing risk assessment and limiting money bonds to dangerous individuals. Illustrating what happens when judicial leaders are empowered to use “evidence-based and validated social science,” DC has shown successful numbers: Over the last three years, 91 percent of those arrested have been released under personal recognizance or supervision, and 88 percent of those defendants made all their scheduled pretrial court appearances. Only a handful of those released pretrial later committed violent crimes. The DC jail is now at 50 percent capacity.

Washington welcomed today’s third generation of bail reform, led by the states, and its potential to increase cost effectiveness and equality in the criminal justice system. “If we continue to work together and push forward, we will be able to end our country’s reliance on money, and end the injustice of detaining persons pretrial merely because they can’t afford to pay for their freedom.”

Watch the full video of the lecture (53 min):