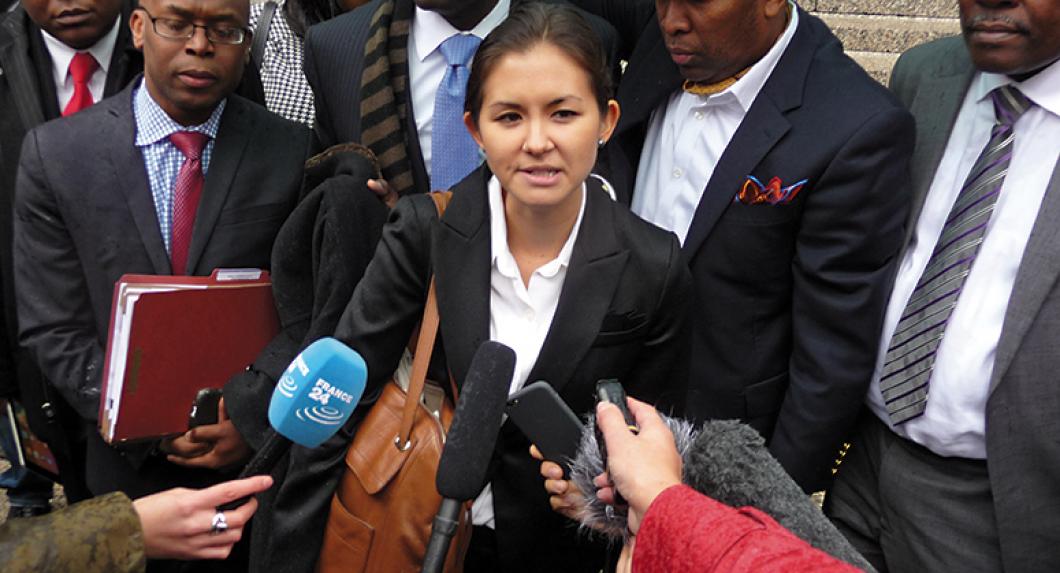 Lindstrom works to hold the UN accountable for the spread of the disease after the country’s 2010 earthquake.

When Beatrice Lindstrom ’10 decided to become a human rights lawyer, she says, “suing the United Nations was very far from my mind.” But as a staff attorney for the Institute for Justice & Democracy in Haiti (IJDH), Lindstrom has spent the past five years doing precisely that: she has played a key role in litigation holding the UN accountable for Haiti’s cholera epidemic.

Lindstrom, who grew up in Sweden and Korea and speaks five languages (English, Swedish, Korean, French, and Haitian Creole), has a longstanding interest in global justice. Prior to law school, she spent time in Thailand working in communities affected by the 2004 tsunami. Lindstrom did not plan to become a practicing lawyer; rather, she hoped to gain a background in human rights law that could be helpful for international aid work. “But while I was at NYU Law, I fell in love with litigation, and I gained a much better understanding of the ways in which the law can be used to bring about social change,” she says.

In 2010, after Haiti was hit by a devastating earthquake, a consultation with Professor Margaret Satterthwaite ’99 led Lindstrom to work for the Bureau des Avocats Internationaux (BAI), the Haitian partner organization of IJDH.

“It was about a month into my stay in Haiti that suddenly we were hearing these reports coming in from around the countryside about cholera,” Lindstrom says. It quickly became clear that the source of the outbreak was a UN peacekeeper base that had allowed waste to contaminate the water source. “We didn’t immediately think it was a legal issue, because the evidence showing that the UN was responsible for bringing cholera to Haiti was so apparent. We all kind of assumed that the UN would do the right thing, initiate an investigation, and provide remedies for the impacted communities.”

When it became clear that the UN would not admit liability, BAI asked Lindstrom to develop a legal response—a difficult task, due to the UN’s broad legal immunities. Lindstrom and the team at BAI and IJDH first filed claims against the UN on behalf of 5,000 Haitian cholera victims, demanding that the UN take action to address their losses, prevent future outbreaks, and make a public apology admitting liability for the epidemic. When the UN rejected those claims, Lindstrom took the lawsuit to the US District Court for the Southern District of New York.

“It’s one of the most significant legal challenges that the UN has faced in its history, and [Lindstrom] has been very strategic in the way she’s assembled networks of practitioners and scholars and diplomats to support her cause,” says Kristen Boon ’00, professor of law at Seton Hall University School of Law.

When the district court dismissed the case, Lindstrom filed an appeal to the Second Circuit Court of Appeals. “I went to the oral argument in the Second Circuit, and she was just so incredibly poised that it felt like she had already done 50 oral arguments before an appellate court—and yet this is really her big debut as a lawyer,” says Satterthwaite.

The Second Circuit upheld the UN’s immunity in the case in August 2016. However, following a report by Philip Alston, John Norton Pomeroy Professor of Law and UN special rapporteur on extreme poverty and human rights, the UN publicly admitted to playing a role in the cholera outbreak and announced a new response that would include renewed investment in cholera control and elimination, and material assistance for victims of cholera.

In the wake of Hurricane Matthew in October 2016, Haiti faced new cholera outbreaks. “It’s just heartbreaking,” says Satterthwaite, noting that the outbreak occurred at the very moment the UN was designing its strategy to address the cholera situation in Haiti. "Hopefully it will also put some moral and practical pressure on those who are designing the program to do the right thing.”

“I’m hopeful that there will be a robust response. But we’ve been pretty dismayed at how this has been handled over the course of the last six years,” Lindstrom says, adding that she and her colleagues are seeking more than an apology. “Our hope is that the UN will provide the kind of remedy that would meet victims’ rights, and it won’t be necessary to pursue the case further.”