Former law clerks and admirers of the late Justice William J. Brennan Jr. gathered to celebrate the 10th anniversary of the Brennan Center for Justice, a lasting tribute to one of the most influential judges of the Supreme Court. 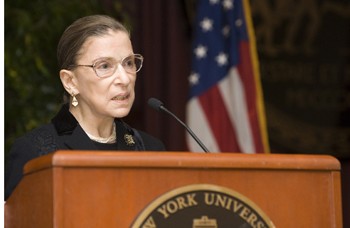 In recent years, many observers have framed debates about freedom of religion and separation of church and state as "culture wars" issues, with liberal "secularists" on one side and the so-called evangelical right-wing on the other. But the late William J. Brennan Jr., who authored key opinions backing religious freedom during his 34-year tenure on the Supreme Court, wouldn't have agreed.

"He believed that individuals should have the right to exercise their beliefs," said Yale Law School Professor Robert Post. "He was always a fan of religion."

Post was one of several scholars and judges--many of whom clerked for Brennan--who paid tribute to the late judge in October, at the 10th anniversary celebration of the Brennan Center for Justice. The center was launched by former law clerks seeking to create a lasting tribute to the judge. They partnered with the Law School to start the center, which was presented to Brennan as a gift at his 89th birthday celebration in 1995.

Brennan, considered one of the most influential Supreme Court judges in history, authored a slew of groundbreaking rulings while on the bench. Among his most famous were Baker vs. Carr, a 1962 voting rights case forcing Tennessee to reapportion itself along "one man-one vote" lines; New York Times vs. Sullivan, a 1964 decision holding that the First Amendment limits the circumstances under which people can be sued for libel; Goldberg vs. Kelly, a 1970 case holding that the state can't cut off welfare benefits without first giving recipients a hearing; and Texas vs. Johnson, a 1989 case holding laws prohibiting flag-burning are unconstitutional. 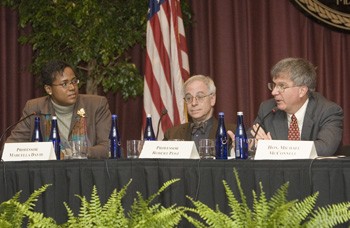 Post and U.S. Court of Appeals for the 10th Circuit Judge Michael McConnell discussed Brennan's views on the First Amendment during a panel discussion moderated by Marcella David, professor of law and international studies at the University of Iowa College of Law.

Post and McConnell said that Brennan's pro-religious freedom opinions were guided by his strong belief that people had the right to practice religions of their choosing. For instance, in one famous case (Sherbert vs. Verner, 1963) he authored the Supreme Court majority opinion, holding that the state couldn't deny a Seventh-day Adventist unemployment benefits solely because she refused to work on Saturdays.

"In striking contrast to the partisans of today," said McConnell, "his [Brennan's] interpretation of the First Amendment does not pit the religious against the secular." 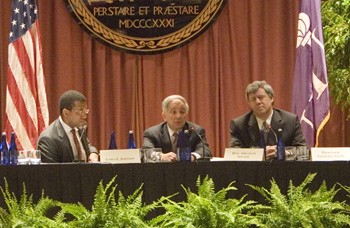 At a separate panel on liberty and national security, Geoffrey Stone, visiting professor at the Law School, Abraham Sofaer, senior fellow at the Hoover Institution, and moderator James E. Johnson, a partner at Debevoise & Plimpton and chair of the Brennan Center Board of Directors, delved into Brennan's views on striking a balance between national security and civil liberties in times of crisis.

Sofaer and Stone agreed that after Brennan joined the Supreme Court in 1956--shortly after the end of the McCarthy Era--the court started scrutinizing the executive and legislative branches more critically. "With Brennan's appointment to the court, the role of the court changed dramatically," Stone said.

Beginning in the late 1950s the Supreme Court began dismantling the McCarthy Era laws and, over the next several decades, issued key rulings rejecting the government's argument that national security took precedence over provisions of the Bill of Rights. Most famously, the Supreme Court ruled in the 1971 "Pentagon papers" case that judges couldn't prohibit the New York Times and Washinton Post from publishing portions of a classified Defense Department report about the Vietnam War.

Supreme Court Justice Ruth Bader Ginsburg gave the keynote speech at the celebration in which she shared personal memories of Brennan. She first met the late judge at Rutgers University School of Law in the turbulent mid-1960s, when she was a professor and he was visiting to give a speech. Brennan arrived with Chief Justice Earl Warren and fellow Associate Justice Abe Fortas, and their presence on campus sparked protests, spurring the dean to mull extra police surveillance.

Brennan's reaction: The school should leave the protesters alone, the judge said. “They are just exercising their First Amendment rights,” Ginsburg recalled him telling the dean.

That same commitment to freedom of speech and civil liberties in general were the hallmark of Brennan’s tenure on the Supreme Court, she said. “He believed the provisions of the Bill of Rights themselves govern the conduct of all officialdom.”

While Ginsburg didn't offer an opinion on how Brennan would rule on current legal controversies, she was willing to speculate about how he would have viewed a fracas that broke out at his 1997 funeral. During the proceedings, a protester began loudly complaining about the church service, claiming that the religious service was inappropriate given Brennan's role in liberalizing abortion laws. Some mourners might have been upset at the interruption, but Ginsburg didn't think it would have troubled Brennan: “Let him speak, Justice Brennan would have said.”