The Center on the Administration of Criminal Law hosted a talk by Cory Booker, the mayor of Newark, New Jersey, on October 25. In the center’s first Conversation on Urban Crime, Booker described his experiences trying to address the problems of a city long known for the violence in its streets. 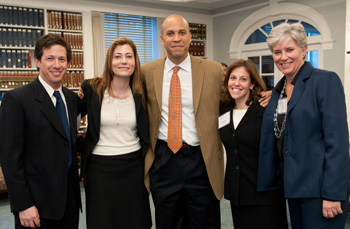 Introducing Booker, Anne Milgram ’96, a senior fellow at the center as well as an NYU Law adjunct professor and former attorney general of New Jersey, praised the mayor’s determination in working to fix Newark’s problems. “He promised the people of Newark that he would make the city safe,” Milgram said, “and he staked his personal reputation and credibility on doing so.” Milgram cited striking statistics to show how successful Booker had been in delivering on his promise to reduce violent crime.

Taking the lectern, Booker characterized his challenges as being more about marshaling collective will rather than finding concrete solutions: “We as a country have to make up our mind. Are we going to accept the status quo and a sense of resignation that there will always be streets that aren’t safe, always schools that don’t work, always poverty that exists, or will we take on a greater sense of responsibility that reflects the courage of our ancestors?”

Booker expressed frustration about Newark’s perception gap: “We still suffer from a very difficult reputational imbalance.... Newark is safer than Little Rock, Arkansas, safer than Orlando, safer than Philly, yet we still hear about ourselves in the jokes of late-night television hosts.” Wryly alluding to his public feud with one of them, he added, “Conan O’Brien now has changed his ways.” Booker made another humorously veiled reference when he described Facebook founder Mark Zuckerberg, who in September had pledged $100 million to Newark public schools, as "this 26-year-old guy that gave me a couple bucks. Afterwards I friended him on Facebook. The least I could do."

The mayor’s attempts to turn Newark around included concrete measures like improving the physical plant of police precincts (“I was asking these incredibly brave and courageous men and women to operate in a place that did not affirm their dignity, did not affirm the sense of urgency that we had”) as well as less tangible efforts, such as shifting from a culture of blame to a culture of responsibility.

Booker recalled how a notorious triple homicide in a Newark schoolyard in August 2007 constituted a turning point in the battle against crime, serving as a rallying cry for the community. In the tragedy’s aftermath, local foundations provided funds for public safety cameras and other crime-detection technologies, community leaders stepped up to do more, and law enforcement agencies in the area began to coordinate their information and actions more effectively.

The city also launched a project in which law firms offer pro bono legal assistance to people being released from prison. The efforts to assist formerly incarcerated citizens with problems such as arrest warrants and outstanding child support payments have improved recidivism rates related to unemployment. “The more innovative we can be in looking at the criminal justice system as a whole,” Booker said, “the more difference we can make.”

Something as simple as mentoring a student four hours a month, Booker argued, dramatically reduces the potential for criminality and increases school performance. “We all have more power than we recognize, but we would rather talk about our problems, complain about our problems, criticize our democracy, criticize our leaders as opposed to recognizing that...we are the leaders we’ve been looking for.”

While acknowledging the reductions in violent crime, Booker maintained that no level of violence is tolerable. He is pressing onward.

“Every single moment of our existence comes down to one choice: accept conditions as they are, or take responsibility for changing them,” Booker said. “Four years as mayor of New Jersey’s largest city, and I have to say...I’m actually more hopeful than I’ve ever been.”