BLAPA celebrates the Courage to Act at its spring dinner 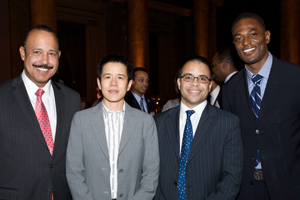 The Derrick Bell Scholarships for Public Service were awarded to students Kellsie Barton '13 and Ashley Harrington '13 for their proven dedication to public service, plans to pursue careers in public interest law, and commitments to social justice in the best tradition of Professor Bell.

Also at the event, the legacies of seven legal icons were celebrated:

• Thurgood Marshall (1908 – 1993), was on Houston’s National Association for the Advancement of Colored People litigation director “dream team” and eventually became the first African American U.S. Supreme Court justice.
• Constance Baker Motley (1921– 2005), judge for U.S. District Court for the Southern District of New York, was the first female attorney for the NAACP and the first African American elected to New York State Senate.
• Derrick Bell (1930 – 2011), was the originator of the Critical Race Theory movement and civil rights lawyer with the NAACP. He famously took leave from the faculty of Harvard Law School to protest the lack of minority women on the faculty. Bell joined the NYU Law faculty but held onto the title “Visiting Professor of Law” for 20 years.
• Robert L. Carter (1917 – 2012), an adjunct professor, was NYU Law’s first African American professor in 1969. He was a judge of the U.S. District Court for the Southern District of New York for 40 years.
• Charles Swinger Conley ’55 (1921 – 2010), attorney of record for Reverend Martin Luther King Jr., and lawyer and judge in Montgomery, Alabama.
• A. Leon Higginbotham Jr. (1928 – 1998), the first African American to serve on the Federal Trade Commission, chief judge of the U.S. Court of Appeals for the Third Circuit, judge of the U.S. District Court for the Eastern District of Pennsylvania, and recipient of the Medal of Freedom.
• Sonia Sotomayor, adjunct professor at NYU School of Law from 1998 to 2007, and a U.S. Supreme Court justice. Sotomayor, then a U.S. Court of Appeals for the Second Circuit judge, delivered the keynote address for the 2009 BLAPA Spring Dinner.

Special video tributes were paid to Carter, Bell, and Conley, who passed away in the last year.

At a ceremony earlier that day in Vanderbilt Hall, a plaque was dedicated to Conley ’55. Dean Richard Revesz and Conley’s widow, Ellen, were joined by University and Law School Trustee Martin Lipton ’55, members of the Class of ’55 and other guests. Also in attendance were Latoya Herring '12 and Kenneth Perry '12, inaugural recipients of the Charles S. Conley Scholarship.