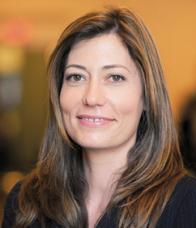 Anne Milgram '96, senior fellow at the Center on the Administration of Criminal Law and vice president of criminal justice at the Arnold Foundation, spoke about her mission to bring data analytics to the US criminal justice system at a TED@BCG Talk in San Francisco in October 2013. In the video of her talk, which is now available at TED.com, Milgram, who is also the former attorney general of New Jersey, describes how she came to realize the importance of using statistical analysis to fight crime.

“When I was an assistant DA, and when I was a federal prosecutor, I looked at the cases in front of me, and I generally made decisions based on my instinct and my experience. When I became attorney general, I could look at the system as a whole, and what surprised me is that I found that that was exactly how we were doing it across the entire system—in police departments, in prosecutors' offices, in courts and in jails. And what I learned very quickly is that we weren't doing a good job. So I wanted to do things differently. I wanted to introduce data and analytics and rigorous statistical analysis into our work. In short, I wanted to moneyball criminal justice,” says Milgram.

Milgram focused on how to use data and analytics to help make the determination, when people are arrested, whether or not they pose a risk to public safety and should be detained. Comparing judges to the baseball scouts of 20 years ago who used instinct and experience, rather than data, to make decisions in recruitment, Milgram created an assessment tool that would provide a scientific and objective measure of risk for judges across the United States.

“We have a ton of work left to do, and we have a lot of culture to change, but the great news about all of it is that we know it works,” says Milgram. “It’s the way that we can transform the American criminal justice system. It's how we can make our streets safer, we can reduce our prison costs, and we can make our system much fairer and more just.”

Bryan Stevenson's TED talk on the flaws of the US criminal justice system (VIDEO)
TED.com, 3/5/12