On November 13, Andrew Tobias, journalist and author of the now classic coming-out memoir The Best Little Boy in the World, delivered the keynote at “‘It Is So Ordered’: Social Change and the Campaign for Marriage Equality,” a symposium held in honor of Thomas Stoddard ’77. 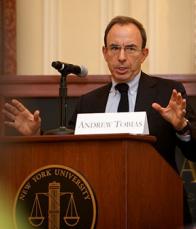 Tobias, who has served as treasurer of the Democratic National Committee since 1999, supplied personal anecdotes to illustrate how dramatically society’s perception of sexual minorities has changed since his youth. As a closeted undergraduate at Harvard, for example, he felt as though he “was the only one in my college of 5,000 undergraduates who was wired the way I was”—except perhaps for the resident tutor who lived down the hall. Decades later, in 2012, Tobias attended a wedding between that same tutor—then-US Representative Barney Frank—and his partner.

Tobias marveled at the societal shift. When he was young, “[being gay] was the worst thing you could be,” he said, yet mere months after Frank’s wedding, President Obama would mark the changing tide in his inaugural address: “For if we are truly created equal, then surely the love we commit to one another must be equal as well.”

Stoddard had a significant impact on the LGBT civil rights movement. From 1986 to 1992, he served as executive director of the New York-based Lambda Legal Defense and Education Fund; under his guidance, Lambda more than tripled its staff and began establishing regional offices, which served gays and lesbians as well as those suffering from HIV/AIDS. Tobias called Stoddard a “visionary” in part for daring to advocate for same-sex marriage in the late ’80s. Tobias spoke as a close friend of Stoddard, who passed away in 1998 due to AIDS-related complications: “He would be so gratified to see the progress we’ve made.”

At NYU Law, Stoddard was a fellow in the Arthur Garfield Hays Civil Liberties Program—which established the Tom Stoddard Fellowship in 1995—and an adjunct professor. He also helped found the Madison Society, forerunner to the NYU Journal of Legislation and Public Policy. The journal and the Hays Program co-hosted the symposium, whose title quotes the final line of US Supreme Court Justice Anthony Kennedy’s landmark opinion on same-sex marriage in Obergefell v. Hodges: “It is so ordered.”

Watch the keynote below, and view the rest of the symposium: