At the 2015 Law Alumni Association Annual Fall Conference, Roberta Kaplan, partner at Paul Weiss Rifkind Wharton & Garrison, spoke about marriage equality and her work on United States v. Windsor. In a candid conversation with Dean Trevor Morrison, Kaplan discussed her personal connection to the landmark case that overturned the Defense of Marriage Act (DOMA)—the first and only case she has argued before the Supreme Court. 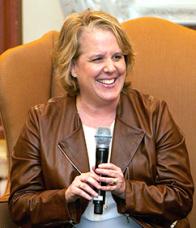 The plaintiff in the case, Edith Windsor, had been denied an estate tax exemption under DOMA after her spouse, Thea Spyer, died. “When I got the call, I had never met Edie, but I knew exactly who she was,” Kaplan said, explaining that 18 years earlier, after coming out to her family, she had become a patient of Spyer, who was a psychologist. “The most incredible part of it all is that she talked about Edie during those sessions…. She was convinced that the only way she would persuade me—I was so despondent—that I could have the life I wanted was to tell me about her own life with this woman named Edie Windsor.”

Kaplan noted that many within the LGBT rights movement did not think Windsor was the right plaintiff to rally the support to strike down DOMA. “There was this concern that she would be perceived as this privileged, white, rich lady, and that wasn’t the image that the movement wanted to project nationwide,” Kaplan said.

But Kaplan believed that the case was winnable, and possibly that it would be settled before reaching the Supreme Court. “I also thought that the tax context was fabulous,” Kaplan added, noting that the United States was founded on a fight about unfair taxation. “Every American in their gut would get what it means to have to pay an unfair tax.”

When the case did reach the Supreme Court, Kaplan contended with conflicting advice on how to approach arguments. In crafting her strategy, however, Kaplan focused not on what was best for the movement, but rather what would best serve Windsor. “I’d grown up to learn that being a lawyer meant representing your client,” Kaplan said. “And that was our rule. I had this poster on my computer that said, ‘It’s all about Edie, stupid.’”

“We didn’t talk a lot about marriage. We talked about gay people,” Kaplan said. “We thought that what we should talk about was the lives of Edie and Thea, and how they were the same as everyone else’s.”

Ultimately, Kaplan’s strategy worked: the Court ruled 5-4 in favor of Windsor. Recalling the response she received walking out of the Court after the arguments, Kaplan said, “It was the closest I’ll ever be to being Mick Jagger.”

“Every once in a while, I still get that feeling of euphoria, typically when I see something that would have been totally bizarre just a few years ago, that’s just so normal today,” Kaplan said. “It hits me, and I just have to pinch myself, that this is what we all managed to do.”