On the Docket: NYU Law faculty discuss the cases they followed most closely in 2022

It was a year for Supreme Court headlines—from the tectonic overturning of Roe v. Wade to other high-profile decisions on school prayer, the right to carry firearms in public, COVID vaccine mandates, and more. But these are far from the only recent cases likely to have a major impact. For insight into other potentially consequential litigation—including cases still making their way through lower courts—we asked five NYU Law experts for their perspectives on the cases that they have been watching most closely this year. 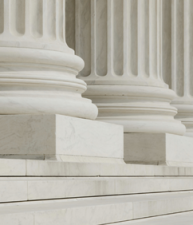 “This case was litigated in a federal district court in Maryland in March, and has been fascinating to follow,” says Catherine Sharkey, Segal Family Professor of Regulatory Law and Policy. In 1951, while a Maryland woman, Henrietta Lacks, was undergoing treatment for cervical cancer at The Johns Hopkins Hospital, her doctor took a sample of her cancer cells. At the time, the collection of cells was ordinary; however Lacks’s cells were not. Lacks’s cancer cells, later referred to as “HeLa” cells, showed novel longevity, growing for days on end. For this reason, HeLa cells were shared with other medical researchers, and were later used to research the effects of toxins, drugs, hormones, and viruses on the growth of cancer cells, to study the human genome, and to develop life-saving vaccines.

“The HeLa cells have ongoing value, including for use in COVID-19 vaccine research recently, and all sorts of other studies worldwide,” explains Sharkey. “The influence of this cell line is unbelievable.”

In 2013, the Lacks family and the National Institutes of Health reached an agreement over biomedical researchers’ controlled access to HeLa cells. Then in October 2021, the Lacks estate sued biotech company Thermo Fisher Scientific for unjust enrichment. “The complaint is fascinating because it details the long, troubled racial history of medical research,” says Sharkey. “It basically says that the Estate of Henrietta Lacks is bringing this lawsuit because Thermo Fisher Scientific benefitted from this development of the cell line, but that Lacks’s descendants have never received any kind of compensation.”

The case is pending—but even if the court were to dismiss it, attorneys may still file similar actions against players in other jurisdictions, Sharkey says.

“I’ve been riveted by the challenges to the Biden Administration’s debt relief plan,” says assistant professor of law Noah Rosenblum. “They’re still working their way through the courts. The most recent decision came out in mid-November from the Eighth Circuit, and was super-strange: the panel had put an temporary hold on the Department of Education program right away to give itself time to issue a ruling, then held the decision for several weeks until just after the election, and only made its temporary stay permanent at that point, in an opinion that had very little reasoning. But at least that court’s reasoning was slightly more coherent than a Texas judge [who] had stayed the program too, with an opinion that was truly lawless.

“Why is this all so riveting? Because this is the new reality of governance and administrative law! Everything the government does will get challenged in court. And the lower federal courts—taking their direction, I think, from the Supreme Court and the multiple, novel (and ultimately groundless) challenges to Obamacare that the judiciary entertained over the last decade—have become incredibly bold and aggressive political players. We are in the early years of a new ‘government by judiciary,’ in which a gridlocked Congress leaves the executive and the judiciary to battle out policy.

“Along the way, whole areas of administrative law—traditionally boring and stuffy—are being dramatically transformed: standing, delegation, standards of deference…. Suffice it to say this is not how anyone expected governance to work.”

“This is a case about a forensic DNA practice called familial DNA searching,” says Erin Murphy, Norman Dorsen Professor of Civil Liberties. “It focuses on the use of New York state’s compulsory DNA databank—which is updated with the profiles of people convicted of crimes—for familial DNA searches in connection with law enforcement's investigation of crimes.

“New York was the first state to have a meaningful challenge to forensic DNA when it first emerged on the scene. Most people would know the names Peter Neufeld and Barry Scheck as co-founders of the Innocence Project, but before that, they were lawyers in a case arguing that New York’s use of this technology was irresponsible. They brought in scientists who said the DNA methods used by the prosecution were not validated, and after discussion, the prosecution expert agreed. As a result of this case and others, in 1994 the legislature drafted a statute that created the New York State Forensic Science Commission, which included a DNA subcommittee. This subcommittee was focused on ensuring that there was scientific expertise informing how DNA was done in the criminal legal system.

“But over time, that committee has evolved from an instrument to check scientific reliability to essentially usurping the legislative role to set policy around the use of DNA—and it approved the use of familial DNA searching in criminal investigations, which brings us to Stevens. Does this commission really have the authority to effectively rewrite the laws that dictate who can be found in a DNA database and how those databases can be used?

“The narrow legal question in this case is an interesting one about the scope of this commission. But the implications for our society are broader. When it comes to something as sensitive as biological testing, as genetics, how are we going to make these big policy decisions? And that is a question which we are seeing pop up nationwide, as methods like investigative genealogy and other cutting-edge surveillance and forensic technologies are put into place. I think this case has a profound, symbolic significance for how we think about who is in charge of deciding when and how highly intrusive surveillance tools should be used by police.” In May, a New York State intermediate appellate court vacated the Forensic Science Commission's familial DNA search regulations.

“Most people know the sneaker company Vans, and MSCHF would describe itself as an art collective,” says Vice Dean and Walter J. Derenberg Professor of Intellectual Property Law Jeanne Fromer. Like many clothing brands, MSCHF does “drops” of new products, but they are new art projects. Their projects tend to be commenting on aspects of contemporary society, often at the intersection of the question: is it art or commerce?

This year, MSCHF took Vans’s famous Old Skool sneaker design, and made the “Wavy Baby,” which looks much like the Old Skool sneaker, but it is not flat—instead its structure is made of exaggerated, wavy lines. MSCHF dropped the shoe in April, and it quickly sold out and then sold for much more on the resale market. Vans sued MSCHF for trademark infringement, claiming that the “Wavy Baby” caused customer confusion, and hurt Vans in the marketplace. MSCHF, on the other hand, asserts that it has a First Amendment right to free speech, and this shoe is a parody of consumer culture.

“There has always been a blurred line between art and commerce, and I think what MSCHF is asserting is exactly on that line: making art out of consumer culture. MSCHF is making this shoe which does flow in commerce, but calling it art, free speech, and a parody. MSCHF says that there should be a parody exception to trademark infringement—which courts have been sensitive to in many contexts over time—but Vans calls this straight-up consumer confusion. And confusion is the touchstone of a trademark infringement case,” says Fromer. “This case has garnered a lot of interest, because of how steeped society currently is in consumer culture. Right now, the case is at the Second Circuit Court of Appeals, and I am fascinated to see what happens.”

"This litigation stemmed from a photograph of the musician Prince that Andy Warhol cropped and colored for the magazine Vanity Fair," says Emily Kempin Professor of Law Amy Adler. In mid-October, the US Supreme Court heard oral arguments that focused on whether or not Warhol’s rendition of the Prince portrait was ‘transformative.’”

“At stake in the Supreme Court case is a fundamental question pivotal to contemporary art: how much can an artist build on previous work to create new work?” Adler says. “So much creativity, not just in art but across all fields, depends on the answer to that question. The implications of this case are not just for visual art—the implications are for creativity itself.”

Adler co-authored an amicus brief in this case, asserting that fair use doctrine is a First Amendment safeguard for all works that use preexisting expression, and defending the meaning and message of Warhol’s art.

Posted on December 21, 2022. Interviews have been edited and condensed. A version of this story was first published on the NYU website. Image courtesy of Adobe Stock.