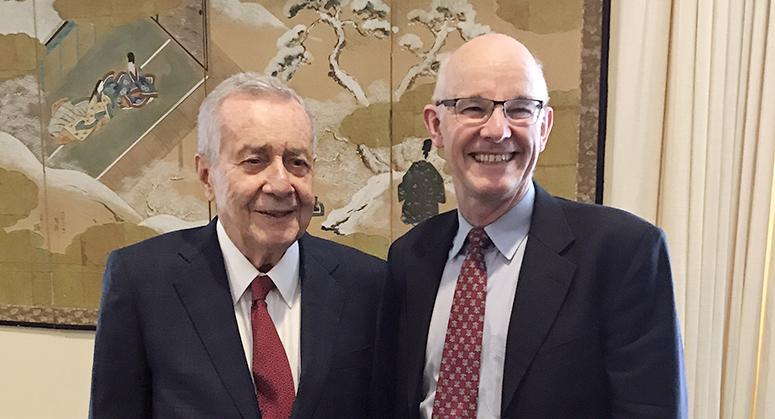 The Honorable Frank Guarini was born and raised in Jersey City, New Jersey. He received his education from Dartmouth College, Columbia University, and New York University School of Law, and pursued advanced studies at The Hague Academy of International Law, the Netherlands.

Guarini served in the military during World War II, where he saw active combat in the Pacific Theater aboard the USS Mount McKinley, flagship of the Pacific Amphibious Fleet. He received the Navy Commendation Medal and three Battle Stars.

Upon being discharged from the military, Guarini finished his education and began his legal practice. He became interested in politics and served in the New Jersey State Senate for two terms and in the US House of Representatives for seven terms. After serving in Congress, he was nominated and appointed as the United States Representative to the United Nations General Assembly.

His legal career was in New Jersey, New York, the District of Columbia, and the US Court of International Trade. His involvement in civic affairs includes service on many boards of charitable, educational, and cultural organizations, and he has received numerous honors and distinctions.

Guarini has been active in many civic and social associations. Additionally, since retiring from Congress, he has been involved in major real estate development projects, particularly along the New Jersey waterfront.

Benedict Kingsbury has been Faculty Director of the Guarini Institute for Global Legal Studies since its founding in 2018.  As well as overseeing NYU's Law Abroad and global moot court programs, since he heads the Guarini Global Law & Tech initiative launched in 2018, and with Professors Joseph Weiler and Thomas Streinz  convenes the regular Guarini Colloquium on Regulation of Global Digital Corporations.

Benedict Kingsbury’s broad, theoretically grounded approach to international law closely integrates work in legal theory, political theory, and history. With NYU colleague Richard Stewart, he initiated and directs the Global Administrative Law Research Project, a pioneering approach to issues of accountability and participation in global governance; their work on megaregional agreements resulted in the 700-page book Megaregulation Contested: Global Economic Governance After TPP (2019), and they are working on a book on global hybrid and private governance. They launched the Global Administrative Law Network, and together with Andrew Hurrell edit the Law and Global Governance book series for Oxford University Press. Kingsbury has directed the Law School’s Institute for International Law and Justice since its founding in 2002. He and NYU Law Professor José Alvarez served as the editors-in-chief of the century-old American Journal of International Law from 2013-2018. Kingsbury has written on a wide range of international law topics, from indigenous peoples issues to interstate arbitration, investor-state arbitration, and indicators and rankings. His edited volumes include Governance by Indicators (2012), The Quiet Power of Indicators (2015), and books on Hugo Grotius (1583-1645) and Alberico Gentili (1552-1608). After completing his LLB with first-class honors at the University of Canterbury in New Zealand in 1981, Kingsbury was a Rhodes Scholar at Balliol College, Oxford. In 1984, he graduated at the top of his class in the MPhil program in international relations at Oxford. He subsequently completed a DPhil in law at Oxford and has taught at Oxford, Duke, Harvard Law School, the University of Tokyo, the University of Paris 1, and the University of Utah.