Center for Law and Philosophy 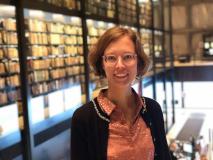 Hadassa Noorda is a research fellow at Columbia Law School and an affiliated researcher to NYU’s Center for Law and Philosophy. She works in the area of philosophy of law. Her principal areas of interest are criminal law theory and philosophy of the laws of war. Her work has appeared in international refereed journals (including New Criminal Law Review and Criminal Law and Philosophy) and she has spoken at several reputed conferences and workshops. You can access her articles on SSRN  and Academia.

Educated in both law and philosophy at the University of Amsterdam and Columbia University (LLB, LLM, BA, MA, PhD), Dr. Noorda was a Dworkin Balzan post-doctoral fellow and a Global Hauser post-doctoral fellow at the Center for Law and Philosophy at NYU. As part of her PhD research, she was a visiting researcher at Georgetown University, UC Berkeley, and the European University Institute. She is also the recipient of a Rubicon grant from the Netherlands Organization for Scientific Research in collaboration with Rutgers’ Institute for Law and Philosophy for her research into the protection of individual liberty in times of terrorism.

Dr. Noorda has designed and taught courses at the bachelor and master level both at law schools and philosophy departments at the University of Amsterdam and Leiden University, on just war theory, philosophy of human rights, political and social philosophy, and introduction to law. She is on the editorial board of The Netherlands Journal of Legal Philosophy.